The legendary Thirsk Mead Hall has a long, violent history and is over 300 years of age, although rumors claim it to be closer to 700. Founded in the Third Era by Hrothmund the Red of the Skaal, the hall was initially built for Nord warriors who wished to live and fight in the wilderness, the old way. Numerous legends of heroic acts surround the hall, but also stories about the chieftains getting killed by their successors. In true Nord tradition, the mead hall was also about downing mead around the clock and telling old tales. In the Fourth Era, the comforts of the mead hall had made the residing warriors too lazy, and, as a result, the hall was an easy target for a group of invading rieklings who overwhelmed the warriors and exiled them to a snowy camp south of their former home. 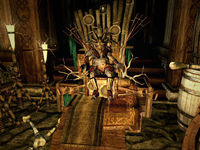 When you pay Thirsk Mead Hall a visit, you will find rieklings gathered outside the entrance, with one of them actively seeking you out. For reasons unknown, the riekling can speak a little bit, saying: "You. Fol. Low. Me." You can ask him a few questions, but it turns out he only knows that one line. Follow him into the mead hall, where the interior reflects the presence of the disorganized rieklings, with chairs turned over, bones scattered around, and several tents put up in the corners. You will be led to the Riekling Chief who sits in his throne, saying: "You strong. Help tribe-kin." You can then choose from three different options, although the chief is not exactly well-spoken:

"Where did you live before you were here?" "Tribe-kin live all places. All of world within great water."
"Who are you?" "You. You strong. Help tribe-kin."
"Why did you take over Thirsk?" "Hot fire. Cold dizzydrink. Happy tribe."

The middle option is the only one that will get you anywhere, and will provide two more options. Choose the 'what is going on here' option and he will respond: "We family. We strong, you stronger." At this point you can back out, or you can suggest that he may be asking for help. The latter will make him explain: "Bilgemuck run. Prize beast, run. Fool tribe-kin, chase away. Bilgemuck fear. You bring, he follow you. Yes?" The Chief will then keep you guessing, but it turns out Bilgemuck is a prize beast as he will repeat: "Bilgemuck prize beast. You find, he follow. Bilgemuck love meat. Give meat, he follow. You go." 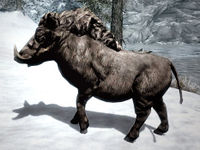 As instructed, find yourself a piece of meat and locate Bilgemuck, a named bristleback that hides on the other side of the lake from the hall. When you locate Bilgemuck, he will greet you with a snort but will be peaceful and await your next action. He will accept all types of meat except boar meat and, once he's finished eating, he will readily follow you back to the hall and find his spot in the pen behind the house. Enter the mead hall for yet another encounter with the demanding chief: "Bilgemuck follow you. Bilgemuck know strength. Tribe-kin stronger. You stay, help more."

For your next task to strengthen the tribe, the chief wants you to gather plants, saying: "Tribe-kin missing redgrass. Need for godspeak dance. You bring redgrass, we dance." When you ask him to translate, the chief will show you a sample of scathecraw, the reddish plant growing all over Solstheim: "Here, like this. Go, bring two hands of redgrass. Be friend of tribe-kin." After a quick farewell dance he will return to his throne and await your return. Scathecraw is one of the most common plants and it is quite easy to gather ten samples from Raven Rock, where they can be picked from all over the main road, all the way down to the field behind Ienth Farm, which is full of them. You will not receive a quest update so once you have ten, return to the chief who will comment: "Good redgrass. Later, we burn. Now, final task."

For the final task, the Riekling Chief has something very specific in mind, and far more serious than the previous tasks: "Bad Nords. Say Thirsk theirs. Live by water, bother tribe-kin. We fight. You strong. You help. No more bad Nords." When asked if he wants you to commit murder, the response will be: "Bad people. They come, fight us. We fight back now."

NOTE: At this point, it is still possible to abandon the quest and instead help the former inhabitants reclaim Thirsk Mead Hall. Choose the dialog option "I'm not sure about this" and leave the building. Head to Bujold's Retreat and speak to Bujold the Unworthy. Agreeing to help her will fail this quest and instead start Retaking Thirsk. Otherwise, continue the walkthrough below.

As soon as you agree to help the Rieklings, the Chief will jump down from his throne and rush out to the front door. When you come outside, the rest of the rieklings will be gathered and ready to fight, and the chief will prepare them for battle: Chief: "Froo ha cawasy jo la. Karoo taray pelfrik?"
All: "Hawah!"
Chief: "Felgir paw tuwani barj. Goora! Goora! Goora!"
All: "Goora!" 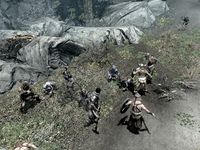 "Stab and run! The tribe-kin way."

With the soldiers prepped for fight, the chief will lead them in an eastern direction towards the hiding place of the mead hall's former inhabitants, Bujold's Retreat. You can choose to run ahead and take care of the Nords yourself, let the rieklings help you with the battle, or let the rieklings do all the fighting (they will dispatch the Nords).

After all of the Nords at the camp are dead, the riekling soldiers will begin to walk back to the mead hall while the chief turns on you, convinced you will take over his spot on the throne and become the new chief: "You strong! All tribe-kin stronger with you. But... maybe you too strong. Too strong, want be chief." This leaves you no choice but to fight the hostile chief. If the other rieklings are nearby, they will attack the chief, or if they have returned to the mead hall, you can lead the chief back to them and they will attack him. Note that the rieklings can injure the chief only to the point that he will drop to one knee; it falls to you to strike the killing blow. When he is dead, the quest ends and you will now be able to ask a riekling to be your follower.