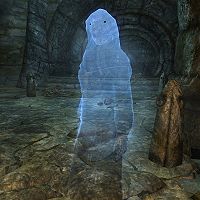 Takes-In-Light, an Argonian sorceress, is a former college mage who is encountered as a ghost multiple times within Labyrinthian, as impressions of past conversations with the Arch-Mage during The Staff of Magnus. She is seen together with the ghosts of Savos Aren, Atmah, Elvali Veren, Hafnar Ice-Fist and Girduin. She begs her companions to leave her behind making her the third to die.

She wears blue mage robes and a pair of boots. She carries a single red apple.

This Skyrim-related article is a stub. You can help by expanding it.
Retrieved from "https://en.m.uesp.net/w/index.php?title=Skyrim:Takes-In-Light&oldid=1314723"
Categories:
Hidden categories: