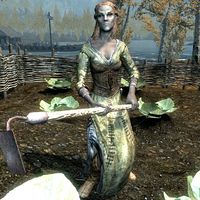 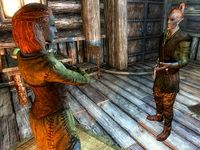 "Dravin! What's come over you?"

Synda Llanith is a Dunmer farmer who works and lives at Merryfair Farm with her husband Dravin. She believes in honest pay for honest work and will pay you for harvested wheat, cabbage, and gourd.

She rises early at 5am and always starts the day with a one-hour breakfast. She then heads outside and works the farm all day long, interrupted only by a one-hour dinner at 6pm. At 11pm she heads back inside and goes to bed.

She wears farm clothes and boots and wields a leveled dagger (up to elven quality at level 20). She carries a belted tunic and a selection of common items and gold.

The remote farmhouse was recently robbed and her husband's precious family heirloom was stolen. When approached while she is working in the field, she will explain: "After we were robbed, Dravin's become more bitter than ever. He hates this place." and "I'm afraid we have little to offer you in the way of hospitality." If approached when she is inside the house, she will add: "You'll have to forgive my husband's manners. He's not used to pleasantries." and "The war's been hard on the farm and hard on Dravin. We don't know what to expect from one day to the next." She will also admit she misses her native Morrowind: "Someday, I hope we can get away from here... perhaps move back to Morrowind. This isn't at all what we expected." After you complete her husband's quest she admits: "Now that you've brought Dravin's bow back, he's back to his crabby old self. For better or for worse, I still thank you."

Synda and Dravin spend all of their time together and can often be heard discussing life as an elf in Skyrim:

Dravin: "Synda... you left your dagger behind again yesterday. I told you, the road isn't safe."
Synda: "Husband, you worry far too much. We are within an hour's walk of Riften."
Dravin: "That doesn't matter. All it would take is a stray wolf or a bandit crossing your path... I can't bare [sic] to lose you after everything we've done."
Synda: "If it puts your mind at ease, I'll take it with me. I'm sorry."

Synda: "Dravin! One of the soldiers I spoke to on the way home said you threatened them. What's come over you?"
Dravin: "I can't stand them, they represent everything I hate about Skyrim. They're tearing the place apart!"
Synda: "All you'll accomplish by threatening them is ending up in the Riften dungeon. You're lucky they didn't take you seriously."
Dravin: "Sorry, Marise [sic]. I just can't sit back and watch them treat us like a resource. This is our home!"
Synda: "I don't care! Just stay away from the soldiers and keep to your business. It's the only way we'll make it through this."

It is best to gather Synda's wheat while you are still comparatively low levelled: since there is a wildlife spawning point very close to the farm, and despite the best efforts of the local guards who also patrol the farm, either or both of the Llaniths may be killed by wildlife, most usually bears. It doesn't help that they have a tendency to rush into combat, rather than run away and leave the fight to the guards. They are also vulnerable to potential dragon attacks that spawn just outside Riften.