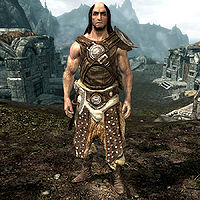 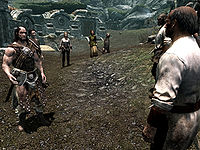 "Troll's blood, what happened to you Pavo?"

Skaggi Scar-Face is a Nord miner who is in charge of Left Hand Mine, the small mining settlement near Markarth. He is the husband of Sosia Tremellia. He recently received an unexpected visit from colleagues Pavo Attius and Gat gro-Shargakh, both of them victims of a recent Forsworn attack. During the related quest, Skaggi will ask you to clear Kolskeggr Mine of Forsworn, so Pavo and Gat can return safely to their mine.

Skaggi owns a house near the mine entrance and sleeps there every night between midnight and 6am. After a one-hour breakfast he heads up to the smelter for eleven hours of work, followed by a one-hour dinner at 6pm. He spends his evenings wandering around the settlement before he finally finds his house and his bed at midnight.

He wears a set of studded armor with a pair of hide boots. He carries an iron war axe, his house key, a spare belted tunic, and a selection of middle-class items and gold.

When you arrive at Left Hand Mine for the first time, you will find most of the inhabitants gathered in the center of the settlement, along with Pavo Attius and Gat gro-Shargakh, with Skaggi seemingly upset:

Skaggi: "Troll's blood, what happened to you Pavo?"
Pavo: "The Forsworn have taken Kolskeggr Mine. We're the only ones left."
Skaggi: "Gods.... You two head inside and get some rest. I'll send word to the Jarl."

You can then speak to him about the Forsworn:

What's all this about the Forsworn?
"Seems Kolskeggr Mine got hit by Forsworn. Those madmen get more bold every season. Pavo and Gat are the only survivors. I'll be sending word to the Jarl about this, but I don't know when help will come."

What if I took care of the Forsworn?
"I'm sure Pavo would be grateful, and we'd all rest a little easier. But that's nonsense. You can't handle a group of Forsworn by yourself. If their axes don't get you, their magic will."

"Damn Forsworn. Only a matter of time before they hit here, too."
"Guess we'll have two more mouths to feed for a while."
"Don't have much to say unless you're here to mine metal."
"I'm in charge of Left Hand Mine. You cause trouble, you answer to me."
"Left Hand Mine deals with iron, the perfect metal to dig with a war going on."

Do you own this mine?
"That I do. If you want to grab a pickaxe and dig up some iron, feel free. I'll pay for anything you bring me." 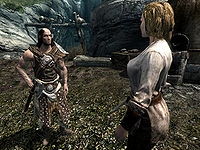 "I'm sorry my daughter gives you so much trouble."

Skaggi's most trusted worker is Daighre and they will often engage in conversation. Unfortunately, Daighre's bored daughter Erith will often pose a problem by disturbing Skaggi, to much regret of Daighre:

Daighre: "Do you think the Forsworn will come here? I mean, if they attacked Kolskeggr...."
Skaggi: "Let's just hope that doesn't happen."

Skaggi: "You work hard, Daighre. Glad you have stayed with us."
Daighre: "I'm grateful, Skaggi. I'm sorry my daughter gives you so much trouble."