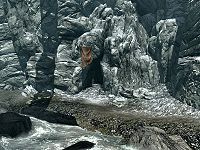 Sharpslope Cave is a cave located within the Forgotten Vale. It is the location of one of the rare shellbugs

This cave is quite dark, so be sure to bring some source of light if you don't have a form of night vision.

The exterior to this cave is Forgotten Vale. There are two entrances to the cave. The upper entrance is found by heading north from the Wayshrine of Resolution until you reach a small settlement containing two tents, then following the path to the right, up and across several bridges and past several Falmer settlements. The lower entrance is found from the same small settlement, but continuing along the shore heading southwest until you reach a group of five chaurus cocoons, two of which are occupied. There are also two orichalcum ore veins among them. A short distance further is the entrance. There are four more orichalcum ore veins starting immediately to the left of the entrance and five more chaurus cocoons, three of which are occupied. The last of the ore veins is in the corner on the opposite shore.

Upon entering the upper part of the cave, you'll find yourself in a dimly lit passage heading west, south and west again as it descends. At the bottom, there is a glowing mushroom on the wall by a turn to the north. The ramp then winds down around the outer wall of the cave in a spiral. There are many Falmer hives within this cave, but most appear unoccupied. There are two Falmer, one a magic-user patrolling the upper part of the ramp. Between the first and second Falmer hives, there is a narrow opening on the outer wall, which leads to a chamber containing a rare shellbug. These creatures need to be mined with a pickaxe for their chitin, not attacked and looted. A short distance further down, you pass an empty alcove. There is a central column of rock surrounded by scaffolding. At the bottom, the path passes into a second chamber. Off to the left, beyond more scaffolding, you will run into a chaurus hunter flying around and a chaurus on the ground, as well as a high-level Falmer inside a tent, above. There is a Falmer chest against a thin rock pillar on the ground level. An earthen ramp to the right leads up to a walkway and terrace against the southeastern wall. There are upper ledges on each side of the cavern, but both are empty. To the east is the lower entrance.