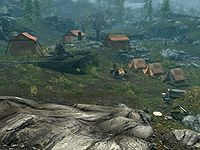 Reach Imperial Camp is an Imperial camp in the Reach, located south of Bthardamz and west of Karthwasten.

This camp will only be present if the Stormcloaks hold Markarth and the rest of the Reach, whether through martial might or via the negotiation during Season Unending. Imperial Soldiers are camped here under the command of Legate Emmanuel Admand, except during the related quest, when Legate Rikke takes command. Like similar Imperial camps that only exist when the hold has changed hands, it has neither a quartermaster or any horses.

Unlike most camps, this camp is laid out on two levels. The lower level has a campfire with a cooking spit hanging over it, and an anvil beside the fire. To the north are three small tents containing unowned bed rolls, while to the east is a workbench, a grindstone, and a wood chopping block. To the west, on a higher level, is the Legate's tent, containing an owned single bed, with an unlocked chest at the foot of the bed and an end table beside it. Farther west is the command tent, containing an end table and a large table covered with a map of Skyrim showing the progress of the civil war and the various forts and cities held by each side. This is where the Legate spends most of their time. To the southeast is the hospital tent, containing two bed rolls, both of which are occupied by wounded soldiers, and an unlocked chest containing various items to treat the sick, including potions of cure poison, potions of cure disease, and leather strips. Outside the hospital tent is an alchemy lab. Between the hospital tent and the lower part of the camp is a tree stump with mora tapinella growing on it, a bird nest containing a rock warbler egg, and a juniper tree. There is a wild leveled animal nearby that will often attack the soldiers while they are patrolling around the camp.

Any time the Reach is controlled by the Imperials, this camp will not be present. As long as you haven't completed Joining the Stormcloaks, you are free to sleep in the small tents.