This article is about the place. For the quest, see Moss Mother Cavern (quest). 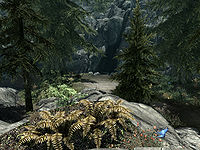 Moss Mother Cavern is a small, open-roofed cavernous grove lush with many kinds of flora and fungi, located due north of Hunter's Rest and northwest of Half-Moon Mill which is inhabited by bears and spriggans.

You may be directed here by asking the innkeeper at Dead Man's Drink about rumors once you are level 16. She will inform you of a missing hunting party, which will initiate the quest to locate them.

As you approach the cave for the first time, Valdr, a Nord bandit archer, beckons you to help him: "Hello? You! Over here! Please, I need help!" His hunting party chased a wounded bear sow into the cave, and was ambushed by spriggans. His companions Ari and Niels were not so lucky, and can be found dead inside. Valdr requires immediate healing, or he will die due to his injuries: "I may have lost a drop or two of blood. Truth is, I'm not going anywhere like this. Hurts to breathe." There are many plants and fungi near the entrance, of the same types as found inside.

After the quest is complete and some time has passed in game, two graves will appear outside, in front of the log where Valdr is first found. 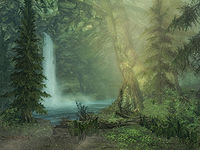 As its name suggests, there is a lot of hanging moss that can be harvested from the various ledges throughout the cave system. It is also a good spot to harvest mora tapinella fungi. Other flora and fungi present inside the cave include various colors of mountain flowers, thistles, imp stool, bleeding crown, white cap, and Namira's rot.

The cave consists of two main areas linked by a sunken path; the second chamber contains a small interior pool. Opposite the entrance, on a ledge by a rock pillar is a spriggan, with a leveled bear close by. Ari's corpse is lying in front of the hunted dead bear, next to two bear traps. The path continues to the east, passing beneath a fallen tree that spans between the ledges. A hollow tree stump in a corner to the northwest along this path contains some leveled loot, including a coin purse, potion, and weapon.

On the left ledge behind the pillar is an iron ore vein. Using the fallen tree to cross to the right ledge and heading back toward the exit takes you to an adept-locked chest with an empty random soul gem in front of it.

As you continue along the path, there is another fallen tree on the left, with Niels' corpse in front, to the left of the pool. A nearby tree hides a second spriggan. To the east, near the rear of the second chamber, you'll find the last of the spriggans. There are more bear traps in this second chamber in deep undergrowth. Along a path northeast of the pool, near a towering tree, look around to find a gold ore vein. At the end of the cave, on a ledge by the southern wall, a boss chest can be found, along with a random one-handed weapon, a potion, and a pair of boots. A random shield and two-handed weapon can be found lying at the bottom of the pool near a skeleton.