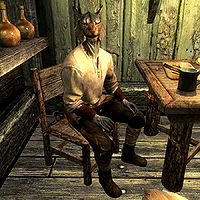 Ma'zaka is a Khajiit citizen who tends the Solitude Lighthouse. He was a sailor in his earlier years, and looks after the lighthouse in his retirement.

Being retired, Ma'zaka is perfectly fine with a calm life and he never leaves the comfort of the lighthouse. He wakes up early at 4am and lounges around before having a one-hour meal at 6am. The rest of his day is largely the same, he spends the entire day relaxing in the lighthouse until he stops to have another one-hour meal at 6pm. At 8pm he goes to bed but he can only stay away from food for so long and will wake up at midnight for a small one-hour snack before heading back to bed.

He wears miner's clothes and boots, and is equipped with an iron dagger. He carries the key to Solitude Lighthouse, and a selection of common loot and gold.

When approached under normal circumstances, Ma'zaka will greet you, "Oh my, old Ma'zaka has a visitor!" and then ask, "What brings you all the way out here?" He will also tell about his past: "Oh, for the salt spray, the creek [sic] of the mast, and the clash of sabers. Those were the days..."

During the quest Lights Out!, Ma'zaka will be the only obstacle standing between you and the lighthouse's light. Granted, while he can be completely ignored, if you were to talk to him while on your mission, he'll be quick to question your motives: "Hey! What're you doing in here?", he will only get more hostile from there "Get out of here or I'll call the guards!" Finally, he'll exclaim "That's it! You're leaving, right now." Regardless of his threats, Ma'zaka will never actually call guards to his aid, nor will he attack you.