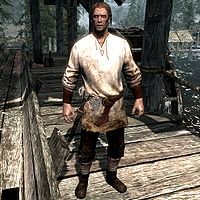 The lumberjack is most often found sharpening a weapon at the grindstone across from Jorgen and Lami's House, on the side of the bridge in Morthal that guards hardly even pass through. Directly behind him are some bushes perfect for hiding in to ensure there are no witnesses, making for a perfect opportunity to perform a long range sneak attack from his back.

He wears a set of miner's clothes along with a pair of boots. He wields an iron war axe in combat.

He may brush you off, saying, "Would it kill you to let a man go about his business in peace? Really, the nerve..."

This Skyrim-related article is a stub. You can help by expanding it.
Retrieved from "https://en.m.uesp.net/w/index.php?title=Skyrim:Itinerant_Lumberjack&oldid=1184747"
Categories:
Hidden categories: