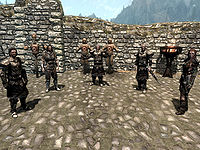 Kodlak Whitemane and the Circle

The Companions have existed for many centuries, since the time of Ysgramor in the Merethic Era, but have not had a true leader since Ysgramor died. As a mostly neutral organization, one that holds honor and integrity in high esteem, the Companions—and by extension the Harbingers—are respected throughout all nine holds of Skyrim.

Harbingers are chosen by their predecessor, though there can be exceptions. The Circle (a group of trusted advisors to the Harbinger) was introduced to the Companions by Kyrnil Long-Nose after a dark period for the guild in the Second Era, when a series of "false and dishonorable" Harbingers laid claim to the guild.