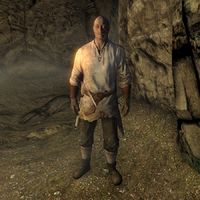 Harald is a Nord miner who works inside Quicksilver Mine in Dawnstar. He is named in Azarain's Journal as a possible member of a Daedric cult, although it is eventually revealed that he is a vampire's thrall, under the control of Fenrik.

Initially, he carries a pickaxe and a selection of poor loot and gold.

You will be tasked with pickpocketing or following Harald during the related quest to see if he will lead you to the Daedric cult. At this point he carries an elven dagger, a quicksilver ingot, an elven dagger of fear, a selection of poor loot and gold, and some bloody rags. Attempting to pickpocket him will update your journal. If you follow him at night, he will use a button at the back of Quicksilver Mine to enter a hidden chamber dedicated to Molag Bal. Upon discovering this, you will be tasked with killing Fenrik and his other thralls, and Harald will attack you.

A Miner's Note can be found on his body should he perish before finding the secret door.