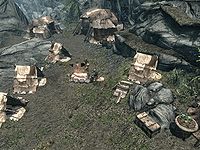 The Haafingar Stormcloak Camp is a Stormcloak camp overlooking the Karth River. It is located southwest of Solitude, almost directly south of the Statue to Meridia.

Stormcloak soldiers are camped here under the command of Istar Cairn-Breaker. They are only hostile if the player has joined the Imperial Legion and doesn't leave immediately following their warnings.

There is a central campfire with a cooking spit over it. There are three small tents to the south, each with a hay pile inside, while to the southwest a bit farther away is the command tent with a wooden table covered by a tactical map of Skyrim showing any progress in the civil war in the middle. The commander spends most of his time studying this map. There is also a dresser in the tent containing clothes. The commander sleeps in the tent to the south which has an owned bed roll, an end table, and an unlocked chest. There is another small tent with a hay pile north of the campfire, with a thistle plant behind it.

The hospital tent farther to the north has three bed rolls and a low table inside. On the table are a philter of health and a leveled potion of healing. To the left of this tent is an alchemy lab on a round wooden table, with an unlocked chest beside it containing more potions and other items to use with the sick and injured. To the right of the hospital tent is another small tent with a hay pile, and beyond two horses are picketed. The horses are owned, and mounting them is considered theft.

In front of the hospital tent is a wood chopping block, with the Stormcloak quartermaster to the south. By the quartermaster are a long wooden table and stack of crates with various iron and steel weapons and armor on display; a workbench is behind the table, and an anvil and grindstone are beside it. The player can sleep in any of the five small tents as long as they haven't joined the Imperials. Galmar Stone-Fist will take over command of the camp once the civil war reaches Solitude.

There are many torchbugs near the camp at night, and during the day several butterflies can be found near the picketed horses.