Mjoll the Lioness lives in Riften where she spends her time speaking out against the Thieves Guild and talking to her faithful follower Aerin about the evils in the world. Acting on her convictions, she has taken on the responsibility of patrolling the town, which she does every day; from 9am she can be found in the Market, at noon she will be inside The Bee and Barb, and from 6pm she patrols the streets of Riften until midnight. Once you reach level 14, however, Mjoll will have more on her mind than just the Thieves Guild. In her younger days, she traveled and adventured all over Tamriel but lost her favorite blade Grimsever when she ventured into the ancient Dwemer ruin of Mzinchaleft. The dangers of the ruin nearly took her life as well, so she retired from adventuring and settled down in Riften. She admits that she feels defenseless without her blade and has a hard time finding a replacement. You can then offer to help her and, while she will refer to it as a 'fool's errand', she will also let you undertake the task, adding a map marker for Mzinchaleft. 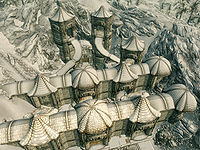 Mzinchaleft is a large Dwemer ruin located in the snowy tundra east of Morthal, northwest of the Hall of the Vigilant. Bandits now inhabit the first zones of the ruin and you will encounter up to six of them guarding the entrance. Fight them, locate the door and prepare for a very long dungeon crawl. Once inside, head down the first two slopes and fight the two bandits residing near the campfire. Proceed through the tunnels until you reach a room with two bandits and a cauldron. Dispose of them and claim some minor loot from the chest. At the intersection, kill the bandit and claim Maluril's Room Key from his body, then use it to unlock the gate. During the Dark Brotherhood quest Kill Maluril, the quarters behind the door will be occupied by Maluril but, during this quest you will find them empty. Read through the Speech skill book A Dance in Fire, v7 then backtrack to the intersection and proceed in a southern direction. In the next chamber you will witness two Dwarven spheres dispose of some bandits before coming after you. Fight them all and keep heading south, following the path as it twists and turns, and disposing of the various automatons along the way.

When the elevator brings you down into the Mzinchaleft Depths, the first thing you will notice is a dead Falmer and the recognizable sound of a chaurus on the other side of the locked door. The door hides a very large multi-leveled chamber filled with Falmer enemies and plenty of secret areas, so make sure to raid every corner before leaving through the door to the east. Two Falmer enemies wait in the next chamber, so dispose of them and proceed forward, into a tunnel-like system with more Falmer. Watch out for a tripwire triggering a claw trap as you enter the next room and fight even more Falmer and a chaurus. The tents contain minor loot and a dead bandit. Find the tunnel to the north and open a gate to another huge chamber with a fountain in the middle. Fight the inevitable Falmer enemies and head up the bridge to the north. At the top, fight another Falmer and locate the button and activate it. This will open the path in the southwestern part of the chamber. More Falmer wait on the other side, including a boss, so finish them off and head up the stairs to the north and the entrance to the third and final zone, Mzinchaleft Gatehouse.

In the Gatehouse, you will only have to go around the corner before you will encounter the Dwarven Centurion that nearly killed Mjoll the Lioness back in the day. It will attack right away and will be accompanied by a Dwarven Sphere. After the battle, locate Grimsever, which is lying on a table. Find the boss-leveled chest behind bars to the north and pull the nearby handle to gain access. Lastly, if you have the attunement sphere, you can gain access to Blackreach from here. When all is said and done, open the western door and activate the handle to be brought back outside, emerging from an alternate entrance west of the main entrance.

Notes
* Any text displayed in angle brackets (e.g., <Alias=LocationHold>) is dynamically set by the Radiant Quest system, and will be filled in with the appropriate word(s) when seen in game.
Retrieved from "https://en.uesp.net/w/index.php?title=Skyrim:Grimsever%27s_Return&oldid=2381044"