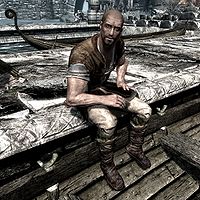 Gort is a Nord warrior who works as a ferryman in Windhelm. He wears a set of farm clothes with a pair of boots and defends himself with an iron war axe. You can hire him to sail you to Dawnstar or Solitude for 50 gold, or Icewater Jetty for 500 gold.

He can greet you with:

"Looking to hire a boat?"
"I can take you to any port on the coast."
"May not look like much, but my boat can get you there faster than walking."

When you first speak to him:

"Where are you headed?"
Dawnstar./Solitude.
"Climb on in the boat and get comfortable."

After you're seated, he'll say:

"You just enjoy the fresh air and leave the rowing to me."

When traveling to Dawnstar he can say:

"Dawnstar doesn't have much of a port, but the miners say its got rich ore veins."

When traveling to Solitude he can say:

"Ah, Solitude. Best port in Skyrim. You should try the Spiced Mead while you're there."

However, if you tell him you're interested in traveling to an island near the border to High Rock:

An island near the border to Highrock.
"The one with the ruined castle? Don't you know that place is cursed? Even seasoned sailors steer far around that place."
I need to go there anyway.
"I'll take you as far as I can, but I'm not hanging around and it's gonna cost you extra."
Take me near the castle to the west.
"Climb on in and let's get this over with."

When traveling to the island he can say:

"They say anyone who steps foot on that island will meet an early death... hope you know what you're doing."

If you don't have the gold he asks for, he'll be annoyed, and reply

"You think I do this for my health? Come back when you've got the coin."