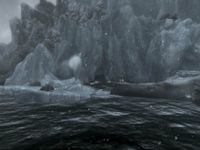 Glacial Cave is an icy cave home to rieklings and horkers.

It is located north of Benkongerike, carved into the glacial cliff face along the northeastern coast.

Either side of the entrance there are barrels and crates. On the left, half-buried in the snow between two crates is an expert-locked East Empire Company strongbox, which contains an East Empire pendant, among other loot. Following the cliff face to the right is a malachite ore vein, and six spiky grass plants yielding ashen grass pods when harvested, as well as a nirnroot plant and two pearl oysters along the shore. Two horkers are located just northeast of the entrance. 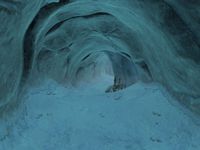 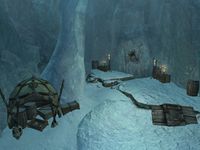 Upon entering there is an ice tunnel heading southeast with rocks and fencing made from rieklings spears on either side. By the second of these is a pickaxe on top of a crate. The tunnel bears to the south and then by some barrels turns back to the southeast. You can see in the distance a riekling tent. There are barrels and crates around cave and against the walls of the tunnel.

As you enter the cave, you are at the top of some shallow ledges above the cavern floor. There are three rieklings waiting to ambush you beneath the snow. Use of the Aura Whisper dragon shout will reveal them to you. As you move forward they will burst from the snow and attack. On your right is an ice pillar with a riekling hut behind it. Against the northeast wall on the ground is a malachite ore vein. To the right of this is the hut seen from the tunnel, inside is an open crate containing a goblet. At the back of the cave, wedged onto a crack on the wall is Karstaag's skull.