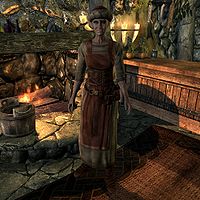 Frida is an elderly apothecary who runs The Mortar and Pestle in Dawnstar. Years ago, her husband died while searching for the Ring of Pure Mixtures and she will ask you to finish what he started.

She sleeps above the main trading room every night between midnight and 8am. She then heads downstairs where she unlocks the front door and positions herself behind the counter, offering her services for twelve hours. At 8pm she leaves the store and heads up the hill for a four-hour visit to Windpeak Inn before bedtime.

She wields an iron dagger, and carries the shop key and some common items and gold. She wears a regular set of merchant clothes with boots and a hat.

If approached in her shop she can say:

"The Mortar and Pestle makes potions, if you can't tell from the name. Just step up to the counter."

"The Mortar and Pestle has cures for every illness, from Ataxia to Witbane."

"Let me know if you come down with the Rattles."

"No. I don't have anything for bad dreams, so don't ask." (Before Waking Nightmare is complete)

"Silus keeps filling his house with those Mythic Dawn things. Creepy, I tell you."

If you meet her outside her shop, she will instead say:

"Frost took my husband years ago. He was a good man."

"My children all grew up and left Dawnstar to make their fortune."

When spoken to directly she can be asked questions:

Have you been in Dawnstar long?
"Pfft. I'm the oldest woman in Dawnstar. Was here when the Skald the Elder was Skald the Younger. He's a fool, if you haven't met him already. Thinks Ulfric Stormcloak is invincible and spits dragon fire. The people here look to Brina Merilis when they need things settled. Real firebrand going [sic] up. Wasn't surprised when she joined the Legion."

If Brina is appointed Jarl of Dawnstar, she will express her support, saying:

"Seems Brina Merilis and the Legion came and now she's Jarl. That's a relief. I don't like the fighting, but Brina is the woman for the job."

If you choose to invest in her business:

I'd like to make an investment in your business.
"How kind. At my age, I've certainly learned how to spend wisely."
Let's see what you can do with this.
"More coin means more supplies, and that means more useful balms, potions and remedies for everyone."

When asked about how she picked up the herb trade, she will tell you about her deceased husband and give you a task:

How'd you pick up the herb trade?
"My husband. We used to go out in the wilds and collect ingredients together. He used to call me his 'pretty Juniper.' It's quite romantic, if you're an alchemist. Frost took the old fool a few seasons back, while he was looking for the Ring of Pure Mixtures. I found the ring's resting place after he died, but I'm far too old to go exploring some cave, now."

I can't do that right now.

"Why am I not surprised?"

I could find that ring for you.

"Well, aren't you sweet? I'd be happy to give you some alchemy training in exchange for the ring, if you bring it to me." She will end all conversations with "Let me know if you come down with the Rattles". or, if you accepted her quest, "If you find that ring, bring it here."

When you return with the ring, she will be grateful and provide some free Alchemy training:

I have your ring.
"Thank you. Here, let an old alchemist pass on some of her secrets to you."

When Frida spends time at the Windpeak Inn, she can often be seen talking to either barkeep Thoring or local bard Karita.

Frida: "Now, who was it that kidnapped the Jarl's son 20 years ago?"
Thoring: "You mean Hildolf the Skull-Splitter? Remember when we rounded up the townspeople and dragged him out of that cave?"
Frida: "Those were the days. I'd never seen my husband fight so bravely before."
Thoring: "Aye, to your husband. Divines bless his memory."

Frida: "Thoring, do you remember the time when that wolf pack come clamoring into town?"
Thoring: "How could I forget? That old alpha male almost took off my leg."
Frida: "Never did find out why they came sprawling into town like that."
Thoring: "Animals in the Pale don't need a reason to attack Dawnstar. It's just their nature."
Frida: "Dawnstar has always held its own against the bandits and wild animals of the Pale."

Karita: "Did you ever have to fight off bandits, Frida? Like in your stories?"
Frida: "Why, I once fought alongside your father when we were both younger. Saved him from getting his fool head sliced off."
Karita: "Who were you fighting against?"
Frida: "Oh, dearie, it was so long ago. But I do remember the celebration we had afterwards. Mead never tasted so good."

Frida: "Did I ever tell you about the day when Skald the Elder was Skald the Younger?"
Karita: "I can't imagine Skald ever being young."
Frida: "Oh, he was young, and handsome. I had half a mind to go after him, myself, before I met my husband."
Karita: "Frida, you aren't saying...."
Frida: "I was a beauty in my day, dearie. Don't act so surprised."