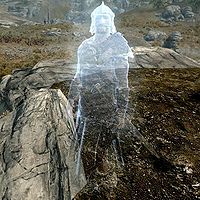 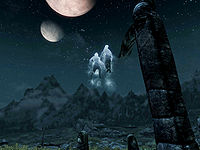 "We're together now. And we will be forever."

Fenrig is the ghost of a Nord warrior who was killed just before the battle at Greenspring Hollow, now commemorated by Gjukar's Monument. He was married to Ruki, who has been searching for him near the monument for an eternity. During the quest The Book of Love, they will finally be reunited.

Ruki is obviously worried about the fate of her lover, saying, "I'm searching for my Fenrig. He was marching with Gjukar's men, who they say were wiped out here. I've turned over every body, though, and I can't find him. Please help me look. He has a bright red beard and hair." When you express confusion about there being no bodies around, she'll grow angry at your blindness and snap, "Are you a fool? Look at the bodies around you. Even if you're blind, surely you smell the blood." and "I don't have time for your foolishness. Either help me or be gone." She will then add: "Come, help me search for Fenrig." and "He must be here somewhere..."

Fenrig is stuck reliving the night before the battle repeatedly. He spends all his time in the camp near the battlefield, where he was apparently killed during a surprise enemy raid. When you greet him he will say worriedly, "We're expected to fight there tomorrow. Gjukar elected to camp here for the night. I don't like it, though." He will elaborate with "Our fires are visible for miles. We're in a low valley. Sitting ducks," which seems to hint at the way he met his doom. Mentioning Ruki will pique his interest: "Ruki? Where is she?", and upon offering her location he will add decisively, "If she's come this far from home, it must be important. Lead on. I just need to report back to camp by sunrise."

When the two dead lovers are finally reunited, a brief conversation will take place:

Ruki: "Fenrig! You're alive!"
Fenrig: "Of course I am. What brings you here?"
Ruki: "I had heard that Gjukar's men were wiped out. I came to find you."
Fenrig: "But that battle isn't expected until tomorrow... Ruki, what's going on?"
Ruki: "I'm so confused. What's happening?"
Fenrig: "It doesn't matter. I'm here. We're together now. And we will be forever."

Together they float up into the sky to spend eternity with one another among the stars.