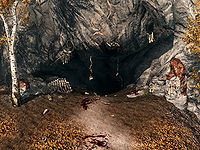 Fallowstone Cave is a small cave with an exit to Giant's Grove, located in the Velothi Mountains northeast of Riften and a short distance north of Lost Prospect Mine.

The location consists of one massive high-roofed cavern with a few small caves and tunnels, one tunnel leading to Giant's Grove, and another climbing back up from the bottom of the main cavern. Trolls and cave bears typically inhabit the place.

Prior to progressing The Cursed Tribe, many blood splatters and bones, including a mammoth rib cage, litter the area along the approach and around the entrance. A few red, blue, and purple mountain flowers grow around the entrance. When you arrive during the quest, a number of the larger rocks around the entrance will be painted with designs typical of giants, while bone chimes will be hanging from the overhang by the entrance. 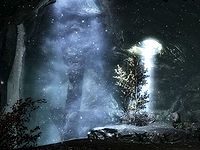 If you are not here during the related quest: When you first enter, there is a tunnel heading east before turning to the south and opening into a massive cavern. In front of you is a large stream formed by a waterfall to the west, which then falls in two steps to the very bottom of the cavern. There is another waterfall to the east that joins the stream after the first drop, forming a powerful surge by the time it reaches the lowest level. As you emerge from the entrance tunnel, there are a couple of piles of rock near a mammoth rib cage. There are two leveled animals and maybe a frostbite spider nearby, one on either side of the stream. Behind the ribs is an earthen bridge that crosses the stream. Several rock pillars support the ceiling throughout the cavern, with vegetation obscuring some of the fungi and flora listed below. Descending one level to the east, you will see a small tunnel ahead, which contains another frostbite spider and the body of a dead orc bandit.

If you are here during the related quest: Giants will have moved in, killing a large number of the animals and adding several large painted rocks and strings of bones. There is also a dead Orc leaning against one of the large rocks next to the first mammoth rib cage, with blood splattered on the ground nearby. The way forward lies across the earthen bridge to the southeast. There are several descending "steps" formed by ledges, which allow for drops sufficiently short to avoid damage. Continue heading southeast, and after a few drops, you will find a tunnel opening in the east wall to the south surrounded by cobwebs. The tunnel only extends a few paces before it comes to a dead end, with a dead Orc bandit, a random healing potion, and a random stamina potion.

Head northeast from here until you reach one of the last ledges, where you can see the bottom of the cavern and across the far side of the stream. There are more animals and/or trolls in this area, although some may already be dead if they have fought each other. As you reach the stream, you will find it splits, with one fork flowing southwest to northeast, and the other flowing west to east. Crossing the stream, but keeping the first fork on your right, there are two silver ore veins next to each other against the west wall of the cavern. Following the cavern wall around, there is a section featuring several trees naturally lit by a hole in the ceiling. Farther to the southeast against the cavern wall is an iron ore vein, with a tunnel carved by the stream farther to the right. During the quest, a small camp with a single giant will be found just north of the iron ore vein. The camp will include a large fire in the middle, and a novice-locked chest, a wolf pelt, and a random healing potion next to a cart beside the fire.

Following the stream down the tunnel leads to another cave, where the stream broadens and flows straight across the cave before disappearing underground near the exit to the southeast. During the quest, a giant will be standing near a small flooded alcove by the northeast wall; the alcove contains a random helmet and a random potion. If you're not here during the quest, there are two more leveled animals at this point, with two more not far away that may be alerted to any fighting, and only the random potion will be found in the alcove. Opposite, the cave rises to the southwest wall, which has another small alcove. This alcove is dry, and contains a dead Orc bandit with a random shield and a random enchanted weapon.

The exit passage is to the southeast, and rises sharply as it turns to the southwest and then to the northwest. During the quest, two bone chimes will be hanging from the ceiling at the entrance to this tunnel, but they are too high for you to trigger accidentally. At the top, the passage opens into a small cave containing an apprentice-locked chest and two leveled animals (normally bears or trolls), unless they came to investigate fighting earlier. The cave is covered in bones, both human and animal, and features the body of an Orc. Just past the corpse is a tunnel rising to the southwest, which leads to the exit to Giant's Grove.

North of the exit passage is the entrance to a narrow tunnel, which also rises quite steeply to the northwest. This tunnel leads back into the massive main cavern, onto a narrow ledge that follows the wall of the cavern to the west. Continue following the ledge until you have passed a mammoth skull, after which it is safe to drop off the edge to land on the top ledge where you initially entered the cave.