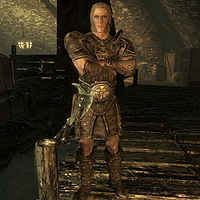 Dirge is an Imperial food vendor and a member of the Thieves Guild who works as the Ragged Flagon's bouncer. He will initially be found standing imposingly on the wooden runway leading to the Flagon from the Ratway, but will then start patrolling the entire span of the tavern.

Befitting his role, he is clad in leather armor, bracers, and boots, and wields a leveled war axe (up to elven quality). He also carries a belted tunic and has a random chance of carrying some gold, lockpicks, food, drink, gems, or jewelry.

Although he is in good relations with fellow lookout Tonilia and bartender Vekel, he will be coarse with you and always square you up with a selection of random threats:

"Stay outta trouble, or there's gonna be trouble."
"Last person who made trouble for Vekel ended up with a smashed head."
"Vekel doesn't like strangers snooping around the Flagon."
"There's two things to do at the Flagon: spend coin and then get out."

When you join the guild, his attitude won't improve one bit, even if you eventually become Guild Master.

"Even if you're one of us, you better not make trouble."
"I don't care if you're best buddies with the Guild Master. I'll still smash in your skull if you try anything."
"The last person that made trouble for Vekel ended up floating in the canal... catch my drift?"

If you ask him about his unusual name he'll be even less polite: "They call me Dirge, 'cause I'm the last thing you hear before they put you in the ground. Why? You think it's funny or something?" If you attempt to persuade him and fail, he'll cut you short: "Good. Now shut up and get out of my face." If you manage to sound convincing when claiming his name is threatening he'll loosen up a bit and offer you a bottle of mead: "Oh yeah? I think so too. You're pretty smart. Hey, here. Have one on the house." He'll also offer a bottle if you're intimidating enough: "No, no. Sorry if I sounded so mean there. My brother always said I have a big mouth. Here, have one on me." If you fail, however, he'll send you off by growling: "Yeah, my problem is I'm too tired to punch your face in."

If you're suspended from the guild, he'll warn you: "You better straighten things with the Guild or you won't be welcome here anymore." If you talk to his brother Maul about the Thieves Guild, he'll tell you: "My brother Dirge works in their hideout. I used to run with them myself, but took a job with Maven after they started hittin' a rough patch."

During the quest A Cornered Rat, Dirge may help with gathering information on Esbern. If you ask him about an old man he'll reply in four different ways, depending on whether you're part of the guild, whether you're friends with him and whether you've already learned he's in the Warrens:

"Don't know his name, but there is a guy like that hiding out down here. Paid plenty for nobody to know about it. You're not the first person to come in here asking about him, either, so be careful."
"Yeah, I think I know who you mean. He's paid good money for nobody to know he's down here, but I guess I can tell you."
"That's interesting. Why do I care? You want a drink, or maybe just a few broken bones?"
"Down in the Ratway Warrens. Nice place, if you don't mind the stench, rats, and assorted lowlifes as neighbors."

If you don't manage to get the information straight from him you can try to bribe, persuade or intimidate him:

If you press him to tell you who else is looking for Esbern he'll confide: "Various shady types I've never seen before. I'd watch my back if I was you."