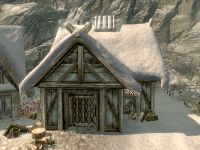 Deor Woodcutter's house is to the south of the central square. It is between Oslaf's House on the right and Baldor Iron-Shaper's house on the left. 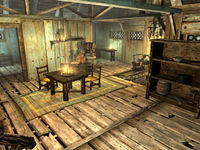 You enter into a large main room with an end table on your left with a pheasant and iron dagger on top. here are many sacksof food throughout. Against the south wall is a pile of firewood including six loose pieces and a woodcutter's axe leaning against the pile. Above is a wall shelf holding a sprig of snowberries. In the southwest corner is a doorway to a double bedroom. In the middle of the room is a small square table and two chairs. On the table is a salmon steak and eidar cheese wedge. Against the west wall is a crate, a barrel with a mead barrel on top and above it all is a wall shelf holding an ice wolf pelt. To the right of the entrance are three barrels, with a cabbage and potato on top of one of them. To the left is a set of shelves containing a copy of Deathbrand. Around the corner is a fire pit with a cooking pot and a cast iron pot containing a cabbage beside it. Above the cooking pot is a hanging rack containing three whole salmon and a garlic braid. To the west along the north wall the room continues alongside the bedroom with a narrow table against the north wall with a bottle of ale and a copy of The Woodcutter's Wife on top. At the rear against the west wall is a set of shelves holding two bottles of ale, a cast iron pot containing three pieces of clam meat, an open crate containing two loaves of bread, and two eidar cheese wheels.

Entering the bedroom there is a cupboard on your left with a deer hide, a medium coin purse and copy of Final Lesson. Against the west wall is a dresser with a bottle and wine and a wooden bowl with a piece of clam meat inside. Coming out from the north wall is a double bed with an end table on either side. On the one on the left is a loaf of bread and bottle of alto wine, while on the one on the right is a goat cheese wedge.