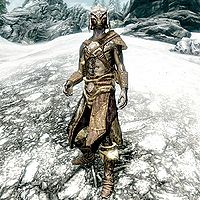 Deep-In-His-Cups is an Argonian citizen who is randomly encountered and talks to you after you have completed the quest A Night To Remember.

He wears a set of hide armor with a matching helmet, pair of boots, and bracers. He has two weapons in his possession: one a leveled mace which can be up to Daedric in quality, the other an iron dagger.

Deep-In-His-Cups will approach you in a familiar, friendly manner: "Hey! There you are, you drunken bastard. I did it, so pay up." Attempting to just walk away from him will have him call to you to come back: "Hey, where do you think you're going? Come back here." If you tried to walk away, his second greeting will be a bit less friendly: "Whoa, not so fast there, friend. You owe me money." Asking him who he is will have him respond: "We caroused together with Sam Guevenne, remember? We broke into the Temple of Dibella? How much did you end up drinking? You and Sam dared me to go into that bandit camp. Well I did and brought back his stupid hat like you said, so give me the 10,000 gold you promised."

At this point, you will be given multiple options towards how to resolve this predicament. You can attempt to persuade him that he's being unreasonable, and if this is successful, you will get him to lower the debt at 750 gold. You can attempt to intimidate him into ignoring your debt, which will make him give up on collecting the debt if you succeed. You can also just pay up, or decline and make him hostile towards you. If you pay him (either 10,000 or 750 septims), Deep-In-His-Cups gives you the 1 septim hat, then leaves for Black Marsh, or to buy something for his headache.

If you try to walk away after talking him down to 750 gold, he will pursue you and remind you of this: "We agreed to 750 gold. I want my money." Trying to speak to him after you paid him will have him happily say goodbye, once more: "See you, friend. And take it easy on the wine."