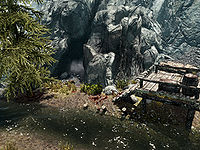 Darkshade is a small cave located just off of the base of the White River waterfall east of Valtheim Towers. It is home to trolls and is littered with human remains.

The entrance to Darkshade is easily spotted due to it being on the bank of the White River, with a collapsed wooden platform just to the right of the entrance. Bodies of a bandit and a Nord can be found lying in front of the entrance. It appears to have been either a bandit lair or a mining cave before being attacked by the trolls who now inhabit the cave. There is a gold ore vein to the right of the entrance and a fallen tree with a second dead Nord leaning against it. The tree stump has a patch of mora tapinella growing on it, slightly further along the bank. There is also a patch each of blue and red mountain flowers found on a small island in the middle of the White River opposite the entrance.

The entrance leads into a short tunnel, which takes a couple of turns and has gory human remains scattered along its length before opening out into a chamber which contains what was once a campsite with a troll lurking about. There is a pickaxe and fur cuirass on the ground, on the left as you enter the chamber. Immediately on your left when entering this chamber is a collapsed table, with an iron sword, an iron greatsword, a bowl of bone meal, three food sacks and a knapsack concealed by a fern, that all seem to have fallen from it. The chamber is overrun with flora, but little that can be harvested. There are four unowned bed rolls on the ground and on the right is an earthen ramp leading up and around to a ledge behind some broken wooden scaffolding. There is a gold ore vein on the rear wall (see bugs), another pickaxe on the ground, near a tree stump, which has a patch of mora tapinella growing on it. By the broken scaffold is a broken table with an empty strongbox, a thistle, a sheaf of wheat and a bottle of wine on top. A dead Argonian can be found lying under an evergreen tree, with a passage heading north to the left of it. To the southwest is another fur cuirass, a pair of fur shoes, a deer hide and six food sacks scattered among human detritus. High on the wall is a small ledge, which you can use as a shortcut back to the exit.

After a few paces the passage turns to the east, there is an iron mace by a lit lantern on the ground. There is another troll roaming the next chamber, which contains a gold ore vein on a raised section to the northeast. There is a dead wood elf to the west under another ledge with an earthen ramp leading up to it. The cave system continues to the north and after another short passage opens out into another chamber. It contains two trolls, one wandering up and down a series of ramps on your right and the other backwards and forwards along the far side of a stream bank to the left. The stream is formed by a waterfall falling down the cavern wall to the west. Climbing the ramps on the east side of the cavern leads to another narrow passage and a small chamber containing a dead goat, a dead bandit and a novice locked chest covered in blood.

Returning to the larger chamber, the stream forms a pool at this end, which appears empty, with paths along both banks. The northern bank has several piles of firewood, one of which has a woodcutter's axe on top. On the left of this path is a huge tree stump with a patch of mora tapinella growing on it. Just beyond this are some support beams and an old extinguished campfire. The second of the trolls will be found in this area. There is a round wooden table holding a gourd and dead rabbit, with two baskets on the ground nearby; one holds two fillets of horker meat. Beyond these is an unowned bed roll with an iron mace beside it, as well as a copy of the Heavy Armor skill book Orsinium and the Orcs and a gold ore vein also on the ground nearby. There is an empty ledge along the north wall that can be reached via rocks to the right of the waterfall.

The southern bank of the stream has an overturned cart that contained a pickaxe and an iron dagger, among several shovels. There is another ledge along part of the southern wall with only a broken tree trunk and empty brazier stand on top. To the left of the waterfall is a dead bandit with a random potion of healing and an iron warhammer beside him and a bear trap hidden in the vegetation. There is a passage heading south, which has a small coin purse on the ground along it. This leads to a final chamber containing one more troll. Opposite to the south is a ledge with a passage heading away. In front of this is a dead elk and a dead Redguard. This chamber is full of many bones and skulls from humans, mammoths, and other animals. By the start of the ramp leading up to the ledge is a dead Dunmer. At the top, to the right of the passage, is an unlocked boss level chest, with five loose septims on the ground around it.