Ice Mages are enemy spellcasters who specialize in the Frost Damage branch of Destruction magic. They are typically found in a few caves, keeps, and ruins across Skyrim known as warlock lairs. Like other elemental mages (fire mages and storm mages), they belong to the Fire/Frost/Shock Mage NPC class.

The type of ice mage you encounter depends on your level. You will continue to meet low-level ice mages even at high levels, but boss-level ice mages will always be at the highest possible level. 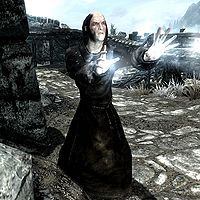 Ice mages rely on their chilling frost-based spells in combat, and carry a leveled dagger in case of close-quarters fighting (iron, steel, orcish, dwarven, elven, glass, or an enchanted dagger of any quality from iron to Daedric). They also have a 10% chance to carry a leveled Conjuration or Destruction staff.

In addition to the gear listed above, ice mages have a small chance to carry potions, poisons, soul gems, Novice or Apprentice level spell tomes, ingredients (common, uncommon, or rare), recipes, and a small amount of gold. They also have atronach forge recipes in their inventories, but their chance of appearing in-game is set at 0%.

Cryomancers and Arch Cryomancers have the same gear as lower-level ice mages, but have a 50% chance to carry a Staff of Ice Storms and do not have the leveled lists for atronach forge recipes.

Ice Mage bosses are the only elemental mages that have a different outfit: they wear a different pair of generic boots and a set of blue mage robes.