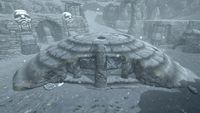 Labyrinthian, where access to the final mask is found

Bromjunaar Sanctuary is a hidden location that can be reached by equipping the wooden mask.

All nine dragon priest masks including the final one, Konahrik

While scouring through Labyrinthian, you might find a skeleton, some notes, and a wooden mask inside one of the snow-buried buildings in the area. Upon reading the notes it is revealed that equipping the wooden mask actually transports you somewhere else—seemingly back in time, before the destruction and subsequent burial of the building.

Bromjunaar Sanctuary contains eight pedestals of dragon priests upon which their respective masks can be placed. Placing all eight masks on the statues at the same time will unlock Konahrik's mask, a powerful ninth mask. The other masks can be retrieved after being placed, but any improvements made to them through Smithing will be erased once they leave your inventory.

To leave the sanctuary, simply unequip the wooden mask.