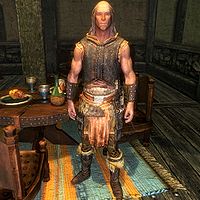 Belrand is a Nord spellsword and blade-for-hire who can be found in the Winking Skeever in Solitude. He charges a fee of 500 gold.

Belrand can join the Blades, and can also be a potential marriage partner.

He will glowingly advertise his services with:

"Versatility is the key to survival. Hire me, and you'll be well prepared to face threats both magical and mundane."
"I fight with both blade and spell. You might say I'm equipped to handle nearly any threat. So, shall we talk price?"
"Sure, you can hire a swordsman or a spellcaster to fight at your side, but why not get both for the price of one?"
"By blade or by spell, if you want it dead, I'll make it dead. All you need to do is pay my fee."
"The blade can be as lethal as the spell, but deadlier still is the one who wields both!"

If you heed his endorsement and hire him, he will gleefully say, "What dangers and wonders shall we discover in the frozen wastes? I can hardly wait to find out!"

After being hired, Belrand will occasionally greet you with, "You're looking hale and healthy. It's good to see you again." or "Didn't think I'd be seeing you again so soon." Like other hirelings, he may offer his services free of charge after being dismissed, saying, "Back for more? Since we had so much fun the last time, I'll join you free of charge." If you accept, he will tell you, "Lead the way."