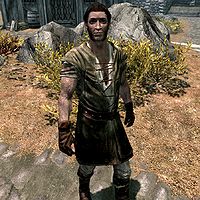 Belethor is a Breton pawnbroker and also the owner of Belethor's General Goods in Whiterun. As a general merchant, he buys and sells almost everything.

Belethor lives the life of a busy merchant and therefore spends much of his time running his store. He wakes up at 8am and immediately opens up the shop for business. He can be found behind the counter inside the shop for the next twelve hours, offering his services to any potential customers. At 8pm, he leaves his shop to begin a four-hour stroll around Whiterun. From his shop, he heads west toward the main gate to Whiterun. Once he reaches the intersection before the Guard Barracks by the gate, he turns right and heads north up the steps to reach the Wind District. He will walk past Amren's house and House Gray-Mane to eventually reach the Gildergreen. At this point, he will head down the steps to the south to reach the market stalls in the Plains District and he will eventually reach the starting point of his stroll around Whiterun, his store. He will repeat this route until midnight, when he returns to his store, heads upstairs to his bed, and sleeps for the next eight hours.

Belethor wears a set of farm clothes, a pair of boots, and a pair of gloves. He is equipped with an iron dagger, and carries a key to his store, as well as a selection of common loot and gold.

"Everything's for sale my friend. Everything. If I had a sister I'd sell her in a second."
"I'd even buy one of your relatives, if you're looking to sell. Ha ha ha ha. That's a little joke."
"You just let me know what you need. I am at your beck and call."
"Imperials, Stormcloaks... I don't care who's in charge around here. I just want to make money!"
"Welcome to Belethor's General Goods. Welcome, indeed."
"I know what you're thinking: "This Belethor, how could he part with such magnificent treasures?""
"I can tell you're a discriminating customer. Perhaps you're a wealthy one, too, hm?"
"Everything's for sale, my friend! You need visit no other shops today!"
"I assure you, I'm prepared to make any deal."
"Please, do look around. I'm sure I have something you'll want."

When spoken to directly he can be asked questions about himself and his business:

What brings a Breton to Skyrim?
"Isn't it obvious? Why, the wonderful weather and hospitable people, of course! Not to mention my great fondness for dragons and petty political power struggles. Ah, but without a doubt, the most compelling feature of this frozen wasteland is the volley of inane questions leveled at me on a regular basis."

How's business?
"Interesting, to say the least. What with all that's been going on. On the one hand, supplies are harder to come by, since fewer traders are traveling the roads these days. But on the other, the scarcity of supplies has led to some, well, 'elevated' prices. All that matters is that I have what you need. And it's worth every septim."

After the siege on Whiterun, you may ask him about his business again. Belethor will again reply with sarcasm:

The siege must have been hard on the city's merchants.
"Oh no, not at all. I simply locked the doors, hid beneath my counter and prayed to the Divines that my life would be spared and my shop wouldn't burn to the ground. But other than that, everything was business as usual. Now, do you have any other painfully obvious things to say?"

If you choose to invest in his shop:

When exiting conversation he may say:

"Do come back."
"Remember, I'll give you the best deals, or die trying."
"Next time, come see my at my shop. I've got some things you'll just love."