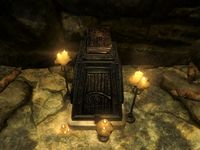 The Black Book needed to access The Sallow Regent is found inside White Ridge Barrow.

The Sallow Regent opens in a dimly-lit chamber facing a dark corridor. The darkness is dangerous, literally; entering it will inflict continuous heavy damage which can not be resisted any means, including the Become Ethereal shout. Floating Wisp-Lanterns drift above the corridors and chambers, providing safe havens of light to walk in. Other forms of light work as well (e.g. torches, Candlelight, Magelight), so long as they keep away the darkness.

To the right in the entrance chamber, there is a pod on the other side of the pool. Continue down the corridor to the first room, where a pod is to the left. The following corridor leads to a larger room with two seekers. There is a pod to the left, and in the darkness straight ahead, a few pedestals hold a scroll of conjure flame atronach, a random soul gem, and copies of the Spell Tome: Detect Dead and the Speech skill book 2920, Second Seed, v5. Behind the pedestals is another pod. Through the darkness to the south is a table with more loot: three soul gems (one black, one grand, and one random), and a copy of the Spell Tome: Conjure Seeker (only if your Conjuration skill is at least 40). The exit is to the southeast, with a pod to the left of the exit.

At the top of the corridor is a series of platforms twisting upwards, with a lurker on the platforms to the right. After the lurker there is a gap, but a bridge will automatically raise. After the bridge is a table with a grand soul gem, a scroll of dead thrall, and a copy of the Spell Tome: Fast Healing. A short while after there is another bridge followed by another lurker. The path then splits around two pillars, before reconnecting and coming to a set of stairs.

At the top of the stairs is the black book The Sallow Regent, a vessel to the left, and some loot laid out on two altars. The loot includes a scroll of conjure storm atronach, a Spell Tome: Flame Thrall, and four soul gems (two black, one common, and one leveled). To exit this part of Apocrypha, use the non-circular part of the black book.

The three Abilities offered by this book are: