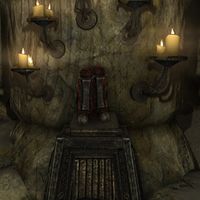 Ahzidal's Boots of Waterwalking are a pair of boots that are part of a set of armor created by the legendary Nord enchanter Ahzidal. They can be found sitting on a plinth in Kolbjorn Barrow, after the first phase of digging is completed during Unearthed. These boots are identical in appearance to ancient Nord boots, but provide four more points of protection and weigh four points more. Their enchantment gives you the ability to walk on water. In addition, if you wear these boots along with three other relics of Ahzidal, you will receive a buff called Ahzidal's Genius that increases your Enchanting skill by ten points. Ahzidal's boots can be tempered with a steel ingot, with the Advanced Armors perk doubling improvement.