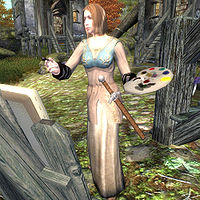 Zoe Malene is a Breton savant living in the small artist community of Hale. She is a rather uninspired painter with low self esteem, but has recently found love with a former Knight of the Thorn, a Redguard from Cyrodiil, named Pyke.

Unfortunately, shortly upon arriving in the Isles, Pyke lost his precious medallion and while Zoe desperately tries to cheer him up, it is to no avail. She spends most of her day, from 10am to 4pm, trying to depict her newly found love, attempting to use the beautiful surroundings of Hale as a background. After another failed attempt, they both enter Zoe's house and wander about, spending a lot of time confirming their love. Between midnight and 6am, they both sleep in her double bed and then start the day with a four-hour breakfast before it is time for another attempt at painting.

Zoe wears a brown tunic, light brown linens and a pair of orange loafers. She also carries a small amount of gold, her house key, and a paint brush. In combat, she relies on a leveled shortsword.

When you arrive to the settlement for the first time, Zoe will immediately push you to help Pyke out of his misery: "If you could help Pyke, I think you'd make him very happy. I've grown quite fond of him and can't stand seeing him this way. I'm still working up the nerve to paint his portrait, but I'd rather do it when he's back to his happier self." After you have returned with the medallion, she will thank you with all her heart: "Thanks again for bringing Pyke back his Medallion! I've never seen him so full of happiness." She will finish conversation with: "I really must get back to my paintings." When she spots you or the other Hale citizens, she may also say: "Hello there. You'd look great in my newest work."

At different stages in the Main Quest, Zoe will share different rumors with you and other NPCs:

During their quality time together in the evening, Zoe and Pyke will occasionally engage in romantic conversations. The conversation is determined randomly and depends on who gets to say the first line, often followed by two randomly chosen answers and ditto replies. The conversation always ends with either Pyke or Zoe declaring their love:

"Zoe Malene's the name. Sorry I don't have much time to have a formal introduction, but I must get my latest painting finished! Not that it matters, really. I'm sure I'll lose my inspiration halfway through." (listen)
"I don't have time for this; I must get back to my next catastrophic waste of time." (listen)