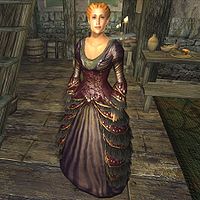 Nanette Don, a Breton sorceress, is Relmyna Verenim's latest apprentice. She resides in Passwall, sharing her house with Felas Sarandas, whom she appears to have a relationship with. She appears to hear strange noises at all times and tends to talk too much, a bad habit that will prove useful during Through the Fringe of Madness.

She wears the Dementia upper-class red finery and also carries her book, the key to her house and a leveled amount of gold. In combat, she relies on a leveled set of conjurer spells and a Summon Scamp spell. 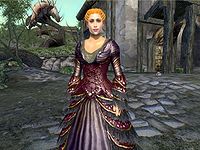 When you arrive at Passwall for the very first time, the quest Through the Fringe of Madness will be active and Nanette will be in her house, reading her copy of The Book of Daedra 24 hours a day, without pausing to eat or sleep. If you enter her house, her concentrated reading will prevent her from noticing you; if you speak to her, however, it becomes quite clear that she hears noises inside her head at all times: "Hello, I'm Nanette Don. I wasn't sure why I came here, until she showed up. Now I know. I'm going to be a powerful sorceress. Just like Relmyna! Do you hear that sound? It's like a horse dying..." On subsequent meetings she will greet you with: "Hello, is there something I can do for you? What was that?" or "Hello! You'll need to speak up." When asked about the Gatekeeper she will reveal 'Relmyna' as her mentor: "He's the crowning achievement of Relmyna Verenim. She's my teacher. The Gatekeeper keeps out people who don't belong. I saw some strangers heading up there earlier. If they're still alive, you can see the Gatekeeper in action. It's glorious." She will then tell you about Passwall: "I don't know who built it. It was here before any of us arrived. It looks like other people lived here before. Dredhwen's been selling what they left behind. So, if you need something, talk to her. She's in the Wastrel's Purse." On the Gates of Madness she will explain: "Can't get in without Sheogorath's Blessing. That's what Relmyna says. That's the reason we're all waiting here - for Sheogorath's blessing. Oh, and I guess there's keys sewn up inside the Gatekeeper's body. Not sure why someone would do that. It's not like anyone can get them now." When exiting conversation, the noises will return: "I really wish they would stop yelling.", "Somebody stop that awful racket!" or "Doesn't that noise bother anyone else?"

After having witnessed the death of the adventurers in front of the Gates of Madness, speaking to Dredhwen will reveal that Nanette's teacher, Relmyna Verenim, temporarily resides at the Wastrel's Purse. When you talk to the powerful sorceress, she will proudly tell you about her 'child' and will end the conversation with an insult, unknowingly starting what will be the death of her pride and joy: "I'm bored with you. Why don't you talk to Nanette? She likes talking. I'll need to cure her of that habit soon enough. There's one sure way to stop a tongue from flapping: cut it out. Shall I demonstrate?" 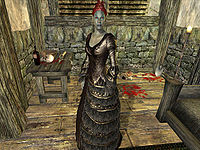 "Why don't you talk to Nanette? She likes talking."

Relmyna is indeed correct; when asked about the mighty guardian, Nanette will now hint at a secret and is obviously dying to share it: "He's Relmyna's crowning achievement. The Gatekeeper keeps out people who don't belong in the Shivering Isles. She made him in the Gardens of Flesh and Bone. She's my teacher. She's going to teach me all her secrets. Oh, and this is really interesting -- wait! Never mind. My big mouth almost just got me in trouble again." If you ask her once again she will be tempted: "I'd like to tell you, but... really, I shouldn't say anything more." With a disposition above 70, Nanette will be unable to keep anything a secret: "I've been dying to tell someone. You seem trustworthy enough... but don't tell Relmyna I said anything! Her Gatekeeper is flawed! Her tears hurt him!" When asked to elaborate she will add: "Her tears somehow agitate the daedra bound to the Gatekeeper's body. Her tears make it really restless. It strains harder against the warding magic. She may seem like a tough woman, but the Gatekeeper makes her all weepy. Go see for yourself. She visits him every night, around midnight. Just don't tell her I said anything. I might get another lesson in the nature of Pain. I don't like those lessons very much." Regardless of Nanette's request, if you choose to use Relmyna's Tears to kill the Gatekeeper, Relmyna will figure out the truth and punish her accordingly later on.

At this point, Nanette will have picked up a daily routine in Passwall. She sleeps in her house every night between midnight and 6am and always starts the day with a two-hour breakfast. After a bit of wandering, she leaves at 10am and strolls around Passwall until noon when she enters the Wastrel's Purse and enjoys a two-hour lunch with the other citizens. The afternoon is spent outside as well, and at 6pm, she once again enters the Purse for dinner. At 8pm she returns home for a bit of relaxation and some conversation with Felas until she finally goes to bed at midnight. Because she has put down her book, she will also have a new set of complaints about that awful 'noise', which she will share with you and other citizens: "Did you hear that?", "It's so hard to concentrate with all that noise!" and "Whoa. What was that?"

Once the Gatekeeper is dead, a devastated Nanette will comment: "The Gatekeeper's dead. Relmyna is very unhappy about that. I'll have to tread lightly around that subject, or I might get another lesson in the exalted nature of Pain." Once you have unlocked the Gates of Madness, she will reveal one last thing during her stay in Passwall: "The doors are unlocked now? Interesting. It doesn't really matter to me, though. I can come and go as I please. Sheogorath has judged me worthy." However, Relmyna Verenim will be furious to find her child dead and will, when you speak to Sheogorath for the first time, drag Nanette all the way to her laboratory, the Sanctum of Vivisection in the ancient ruin of Xaselm. 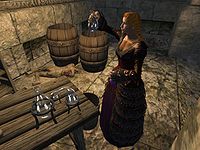 Once there, her teacher will focus on her experiments and torture her innocent victims around the clock, tirelessly searching for the "sixth element", while Nanette will strive to maintain a normal life, regardless of the many screams and cries echoing through the halls. She will now sleep on a bedroll in her room every night between midnight and 6am. She was supposed to eat her three meals a day like she did back in Passwall, but the Sanctum contains no food, leaving Nanette to wander aimlessly around for two hours at 6am, 12pm and 6pm. However, during her free time she decides to concentrate on expanding her knowledge and improving her alchemy skills. Between 8am and midnight, when not searching for food, she will either be found reading her book or practicing with a mortar & pestle in her room. Occasionally, she will summon a Skeleton. Every hour, she will consider switching activity. Her new home in Xaselm is certainly less quaint. She has set up residence in a small room in the eastern part of the Sanctum, near to the corridor leading to the exit. Four mort flesh portions lay in a pool of blood on one side, while a failed experiment corpse and a pile of bones can be found next to the bedroll in the opposite corner, giving the room a macabre and sickening atmosphere. A full set of novice alchemy apparatus can be found here, as well as a disquieting pair of shears on a shelf. 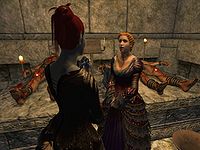 If you persuaded her to tell you how Relmyna's tears hurt the gatekeeper, she will refuse to talk to you in Xaselm: "No way! I'm never talking to you, ever again! After she found out what I told you... she... she... you have no idea what Pain is until she... she... Just leave me alone -- go away!" Otherwise, if you speak to her before meeting Relmyna she will offer some advice: "Be careful of Relmyna's temper. She... she has ways of extracting obedience." After meeting Relmyna and accepting her task, Nanette will be most grateful: "You are here to help rebuild the Gatekeeper. That is very good of you... considering what you did to him. So many strange noises here. People screaming, animals dying. But I've learned so much... so much." Once you have rebuilt him she will be happy: "The Gatekeeper walks again. This is good. Now maybe Relmyna will be in a better mood around here. Did you hear that? Oh boy..."

If you pay Nanette a visit after completing the main quest, Nanette will respectfully utter: "My Lord Sheogorath!" If you talk to her, she will be at your service: "My Lord! What can I do for you?" Some things never change however; when exiting conversation she will still hear strange noises: "It's been a great bounty being in Your Presence. Where'd all those trumpets come from?"

At different stages in the Main Quest, Nanette will share different rumors with you and other NPCs: