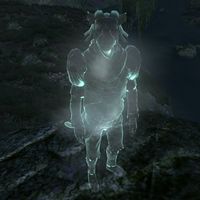 M'desi is a Khajiit knight whose soul is confined to the Hill of Suicides. The strain of the Shivering Isles apparently got to him, as he took his own life and ended up on the Hill. During the undocumented quest Ghosts of the Hill of Suicides, M'desi's tormented soul can be freed by returning his skull to him from the Sanctum zone of Rotten Den.

While his skull rests peacefully at the feet of a Scalon statue trap in Rotten Den, M'desi is bound to wander around on the Hill for eternity. His ghost can be found halfway up the eastern part of the hill, strolling restlessly about, waiting to be released from the curse. It is not possible to speak with him, but if you have claimed his skull and approach him, M'desi will stretch out his arms and reward you. He will then finally find his peace and disappear from the Hill.

He wears a set of lower class clothing: a patchwork shirt, patchwork pants and a pair of scruffy shoes.