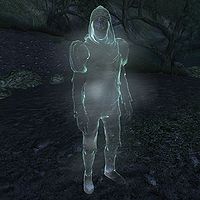 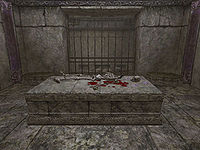 Lorenz Bog-Trotter is a Nord knight whose soul is confined to the Hill of Suicides. The pressure and insanity of the Shivering Isles apparently got to him, as Lorenz Bog-Trotter killed himself and, as a result, ended up on the Hill. During the undocumented quest Ghosts of the Hill of Suicides, Lorenz can be freed by returning his skull to him from the Lost Crypt area of Knotty Bramble.

Bound to wander for eternity, Lorenz can be found near the shore in the northeastern part of the Hill, strolling restlessly around and largely ignored by the wildlife. It is not possible to talk with the restless soul, but if you approach him with his skull in your inventory, a relieved Lorenz will fortify your fatigue as a reward and finally find his peace.

Due to the location of his skull in Knotty Bramble, where two preserved Zealot bodies can be found in close proximity of his crypt, Lorenz' clothing reveals his real-life beliefs. His ghostly remains still wears his zealot's hood, along with a patchwork shirt, matching patchwork pants and a pair of scruffy shoes.