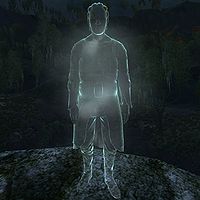 Limark is a Redguard knight whose soul is confined to the Hill of Suicides. The strain of the Shivering Isles apparently got to him, as Limark committed suicide to escape his troubles only to wind up on the Hill. During the unmarked quest Ghosts of the Hill of Suicides, Limark's soul can be released by returning his skull to him from the ruins of Milchar.

Limark's ghostly remains spend eternity on the southernmost peak of the Hill, just wandering around, at times looking down into the body of water below. It is not initially possible to correspond with Limark, but if you have his skull in your inventory he will spread out his arms and fortify your fatigue as a reward, then disappear into thin air, finally at peace.

He wears a set of lower class clothing: a grey tunic, grey trousers and a pair of brown loafers.