Amber is a substance that is only found in the Shivering Isles. As part of The Antipodean Hammer quest, you can take Amber to Dumag gro-Bonk and he will fashion it into Amber armor and Amber weapons free of charge. Amber Matrices can additionally be used to create enchanted armor and weapons. Amber can be found in containers or on creatures; a few samples also exist in houses.

A few samples of Amber are found in people's houses, and can only be acquired by stealing. Homes containing Amber are:

All standard Gnarls may be carrying Amber, in most cases with a 20% chance. One notable exception are the Gnarl Cultivators, spawned by the Gnarl Chrysalises found in The Fountainhead. Gnarl Cultivators each have a 50% chance of carrying Amber and can also be repeatedly spawned and killed to efficiently harvest Amber. It should be noted that unlike Grummites, Gnarls will not carry matrices at all. The article on Gnarl Bark provides details on locations where Gnarls can be found. 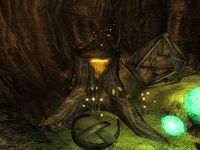 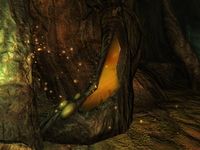 Hollowed Amber Limbs and Hollowed Amber Stumps are containers that only contain Amber. They seem to attract a sort of golden sparkling "dust sprite" which hovers in the air nearby. (These sparkling "sprites" are also found in the outdoors, but then only for decorative purposes, and not to indicate any amber in the vicinity.)

Although somewhat varied in appearance, all such limbs and stumps contain the same items:

All of these containers are non-respawning; if you revisit a dungeon, no new Amber samples will appear in the Hollowed Amber Limbs and Stumps.

Hollowed Amber Limbs and Stumps are found primarily in Mania dungeons, specifically in the following dungeons:

Hollowed Stumps and many boss chests in the Shivering Isles can possibly contain Amber, along with many other possible items. Many different types of Hollowed Stumps and boss chests exist, each with different possible contents. Some never contain Amber; some have a guaranteed Amber sample; some have a randomly generated Amber sample. If the Amber is randomly generated, there is a chance that an Amber Matrix will appear instead of Amber, depending upon your level:

In general, these containers respawn and therefore return trips to the same dungeon may allow additional Amber to be collected.

The types of containers that may contain Amber are:

The individual dungeon pages list locations where these containers can be found.