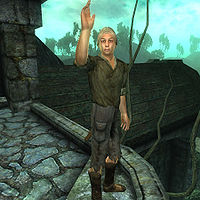 Hirrus Clutumnus is an Imperial commoner living a miserable and suicidal existence in Crucible, New Sheoth. He asks you to kill him as he does not want to commit suicide thus ending up as a ghost on the Hill of Suicides.

Provided you're not in his vicinity, Hirrus will lead a seemingly normal life. He sleeps in his bed from 10pm to 6am, heads to Sickly Bernice's Taphouse for a two-hour breakfast and then returns home for two hours of restless pacing, pondering his future. He then decides to take a breath of fresh, Crucible air, and will be found wandering for two hours near the gates leading to dangerous and monster-infested Dementia, before heading to Bernice's at midday for a two-hour lunch. He will spend the rest of his day depressingly wandering around his house, taking a break between 6pm and 8pm to seek Arden-Sul's counsel, provided you are not between The Cold Flame of Agnon and Retaking The Fringe quests. Randomly during the day, except when sleeping, Hirrus will venture to the edge of the stairs leading to Sheogorath's Palace and contemplate suicide. If he does, it is likely he will stay there for at least four hours. If he does see you in Crucible, Hirrus will do all he can to get your attention in order to ask you to meet him by the sewer grate after midnight. True to his word, he will be found there desperately waiting for you between 9pm and 7am. Once he's asked you to kill him, he will be found all day long on the top of the stairs, nervously looking down.

Hirrus Clutumnus has very few personal items. His clothing combines items from Cyrodiil and the Shivering Isles. He wears a collared shirt with patchwork pants and scruffy shoes. He wields an iron shortsword as his only weapon, and carries a leveled amount of gold. If you kill him successfully, he will also carry his house key. Hirrus knows a leveled set of rogue spells. 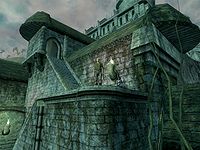 "Everything looks so small from up here."

When you walk the streets of Crucible for the first time, Hirrus will try and attract your attention, whispering one of three possible requests: "Hey, you. Come over here. I got to ask you something. Something important. Shhhh. Just come over here.", "Hey, you. Yeah, you! Come over here." or "Psssst. Over here. I need to talk to you. It's important." If you give in and approach him, he will say: "I have a proposition for you. Best not to talk about it here. Meet me at the sewer grate northeast of the Sheogorath statue. Come after dark. Come alone." At dusk, if you ignore his secrecy and show up with a lit torch, an annoyed Hirrus will ask you to put it out immediately: "Put that torch away. Do you want people to see us talking?", even though he will often give away his 'proposition' by complaining loudly, "Won't someone end me? Take my life, please!" Once in the dark, Hirrus will make you an offer: "Ah, I'm glad you came. So, are you interested in earning some loot?" If you decline, he'll plea for your help: "Oh. Really? Look. I'm in desperate need of a champion, a hero. Are you brave and fearless?" If you decline once again, he will finish the conversation (and jam the quest; see this section) with the words: "So, you're a coward. Just my luck. Never mind. I'll find someone else to do it." Hirrus will then walk away from the sewer entrance, and will never say anything but "Meet me after dark at the sewer grate northeast of the Sheogorath statue." Unfortunately, Hirrus will never show up at the grate.

"A bad day? A bad day? Try a miserable existence! There's no point in talking about it. Action must be taken. You must... I need you to kill me."

"I need your help. I need you to send my soul away from this world! You must... you must kill me."

"Why don't you just kill yourself?"

"Have you seen those miserable souls on the Hill of Suicides? Do you think that kind of existence is any better than this? No. YOU must kill me."

When asked about how he wishes to die, he will suggest: "I don't necessarily want to see it coming. And I want to die here in the city so all these people finally believe me. They'll wish they were nicer. You probably want to do it without spectators though, so you don't get in trouble. Best to make it look like an accident. But remember, I don't want to see it coming. Take me unaware!" After that, he will let his death be up to you: "Well, that's up to you, I suppose. I'm going to go about my daily life, such as it is, as if nothing has changed. Make your move when you wish. But, please, do it soon." When asked about the reward, Hirrus will explain: "Oh, that. When you kill me, take the key to my house. Nothing really worth taking, except what's locked up in the jewelry box. You can have that. Okay, I'm going to pretend everything is normal. Make your move as soon as you can. But, let me get away first so I don't know it's coming." If he feels threatened after the conversation, he will immediately cower and shout: "Stop! Take me unaware, not like this!" or "No! Not like this!" Or "Please! No!" If you attack him, he will cry: "No, no! The pain!" or "It hurts, stop!" which will quickly alert the guards. Approaching him will result in a bit of advice: "I don't want to see it coming. Take me unaware. And, for your own good, it should probably look like an accident." 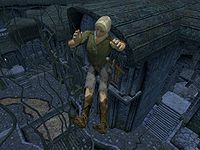 He will eventually make his way to his favorite spot; the landing halfway up the staircase leading to the Palace Grounds. Once there, he will silently enjoy the view and not even notice your presence. When approached at this spot, he will explain: "Sometimes I come up here to think. Everything looks so small from up here. Makes me feel better, you know? Like I'm not so small myself. But that feeling only lasts a little while. Then I start thinking about how miserable everything is, and then all I want to do is step off the ledge. I can't just jump. Don't want to end up on the Hill. But I hope that someday maybe a big gust of wind will come and push me off so I can end it all." If you decline to push him right away, he will just say "Yeah, right…" and continue looking at the rooftops of Crucible. If approached again, he will give you a different greeting: "I often wonder what it'd be like, to fall to the ground so far below. I bet it'd be like flying -- then suddenly falling into a deep, blissful sleep." If you choose to push him, a rather surprised Hirrus will shout "What?!?" and will then take the long fall down, causing the nearby Dark Seducer Guard to comment: "Someone really ought to put up a railing. That happens all the time." When you get near his lifeless body, he will whisper: "Peace at last. Thank you! Thank you..."

All over the Isles, people will often discuss the depressed Imperial. When asked for rumors or during private conversations they will say: "I understand Hirrus Clutumnus is begging for people to kill him.", "In Crucible, a man named Hirrus Clutumnus has been trying to convince people to kill him." and "Someone should put Hirrus Clutumnus out of his misery." Others will coldly respond: "Can't say I blame him, living in Crucible." and "He's an odd one. I'm sure someone will take care of him soon." Halion, the poet residing in Hale, will even recite a poem: "If you happen upon a lonely soul who goes by the name of Hirrus, take his word as truth be told, I'm afraid he is deadly serious." and "Of Hirrus I can only say this, he wouldn't feel that way if he lived in Bliss." Meanwhile, in Split, the demented Atrabhi will mischievously tell you: "In Crucible, there isn't a man named Hirrus Clutumnus trying to convince people to kill him. He's very happy with his life."

At different stages in the Main Quest, Hirrus will share different rumors with other NPCs: