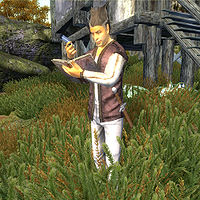 Halion is a High Elf bard and dedicated poet living in the small artist community of Hale. He keeps mostly to himself but will attempt to turn any conversation into a rhyming verse.

Halion wears a brown shirt, a pair of grey trousers, and a pair of orange loafers. He carries a quill, a cheese wheel, and his key. He wields either a leveled dagger or shortsword. Besides that he carries leveled scrolls, a small amount of gold, and potions. Halion knows the standard leveled Bard spells.

The attractive location of Hale, with its panoramic view over The Isle of Flame, very much inspires the hardworking poet and he spends most of his time scribbling down rhymes in his book. He wakes up at 6am and always starts the day with a three-hour breakfast on the ground floor of his house. At 9am he heads upstairs and sits down at the small study table, pulls out his book, and starts writing down his many rhymes. After three hours, at noon, he finally ventures outside and positions himself in the grassy area just west of Tall-Trees-Falling's house where he proceeds to work for six hours. He puts his book away at 6pm and spends the rest of the evening, until his bedtime at midnight, strolling around Hale while sharing his poetry with the other residents.

When you first meet him he'll say, "I just thought you'd like to know, I'm overjoyed to bid you hello." When you talk to him, he will rhyme, "I bid you greetings and cheer, with the grace of a noble stallion. You seem to be of fine temper and wit, says the poet known as Halion." Subsequent times when you speak to him he'll say, "As I look upon your face, you remind me of a summer's day. Of a distant and secret place not so far away." When you end conversation with him he'll sometimes say, "It's time to say goodbye, I'm sorry I must fly."

At different stages in the Main Quest, Halion might share a special poem with you or other NPCs:

1During the poem, "If at Sickly Bernice's Taphouse you wish to drink, take a moment to stop and think." he stops talking when he gets to the word "drink"
2During the poem, "There is a man in Bliss who feels his doom comes soon. Some say he's wrong and others say he's right, but I say he's a loon." the subtitles say "Bliss" but he says "Crucible".
3During the poem, Of Tove in Bliss I tell you this, there's something that she desires. She builds and builds and builds all night until her weary bones retire. there is a mistake in the subtitles referring to Tove as a female.
Retrieved from "https://en.uesp.net/w/index.php?title=Shivering:Halion&oldid=2481783"
Last edited on 10 September 2021, at 15:59