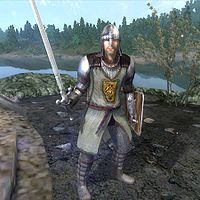 Gaius Prentus is an Imperial warrior whose task is guarding The Strange Door that has appeared in the middle of Niben Bay.

Gaius takes his posting very seriously and follows his orders to the letter: constantly patrolling the area around the door, never even eating or sleeping. His task also involves taking care of those who come back through the portal so as soon as Belmyne Dreleth appears he will shout "Here comes another one!" and "Stay back! This one's violent." and will then proceed to attack the demented fellow.

He wears the standard uniform of the Bravil Guard: a Bravil cuirass and shield, a guard helmet, chainmail boots, gauntlets and greaves. Similarly to most guards, he wields a silver longsword. He also carries a spare set of random lower-class clothing, which he never wears.

If you talk to him he will initially dismiss you saying: "Can't talk now. That door has been making noises again. No telling what's coming out." After he deals with Belmyne Dreleth he will warn you: "I'd stay back from that door if I were you. Nothing that's gone in has come out right." When you inquire further he will tell you: "I don't know where it came from, and I don't want to. Those who've gone in have come back out... wrong. I'm just here to warn folks to stay away." and "Look for yourself! Their brains are addled. Got no sense! Perfectly normal people went in there. And this is what's come out."

If you tell him you'll stay put he will praise you: "Good choice. I mean, look at the thing! No sane person would go through there. And none have come out, that's for certain." If you decide to try your luck he will sneer and say: "Ha! It's your funeral. I'm just here to warn people, not keep them out. Go ahead in. I'll be here to clean up the mess when you come out." Talking to him again will net you: "I still say steer clear of that door. Nothing good to be found on the other side of it. Of that, I'm certain." After the speech of Sheogorath he will ask: "Did you hear that? Did you? Voices from nowhere, madmen... where does it end? How did I get this posting?" If you enter the Isles, but have not accepted Haskill's offer yet he will say: "Don't go back in there. I'm warning you. You'll end up like the others." Once you have gained entrance to Sheogorath's Realm, he will refuse to speak to you: "Stay away from me. You've already spent too much time... over there."