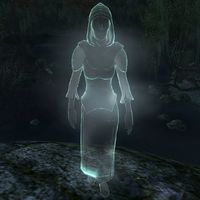 Gadeneri Ralvel is a Dunmer knight whose soul is confined to the Hill of Suicides. The strain of the Shivering Isles apparently got to her, as Gadeneri committed suicide to escape her troubles only to wind up on the Hill. During the undocumented quest Ghosts of the Hill of Suicides, her soul can be released by returning her skull to her from the depths of Knifepoint Hollow. She is the only ghost on the Hill with a living family member, namely her brother Erver Devani, who will explain the unfortunate fate of his sister and reward you himself if you help free her soul.

Gadeneri's ghost wanders around the central part of the Hill of Suicides 24 hours a day, seemingly cursed and waiting to be released. It is not possible to correspond with her, unless you have claimed her skull from Knifepoint Hollow. If that is the case, a grateful Gadeneri will spread out her arms and fortify your fatigue as a reward. She will then disappear in a mist, leaving you and the other restless souls behind.

She wears a set of lower class clothing: a zealot's hood with a patchwork shirt, coarse linens and a pair of scruffy shoes.

As her brother, the overly paranoid Deepwallow resident Erver Devani is deeply concerned about his cursed sister. When you meet him for the first time, he will reveal that his sister is part of the reason for his insane paranoia: "I know they're coming. They'll come for you. Like they came for my sister. Put her on the Hill of Suicides." When asked about the Hill, he will continue: "It's where you end up if you don't die according to His plan. They will drive you to it. Like They did poor Gadeneri. I loved her, and then she was gone. By her own hand. It's said any soul on the Hill can be released if their remains are brought to them. I've heard that those that free the souls become blessed. Can't say for sure. They scatter the remains all over the Isles. Bastards." Once you find the skull he'll urge you on: "You've found Gadeneri's skull? Take it to her at the Hill of Suicides! Before They find out you've got it!" He will never reveal the identity of "Them", but will be very grateful if you save his sister from the curse: "You've done a great service freeing my Gadeneri. Thank you."