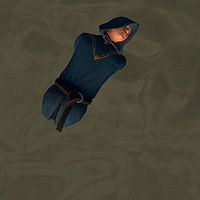 The Dead Volunteer was a Breton rogue and member of the Heretics, who volunteered to be sacrificed in the pit of Fain in order to hasten the "rebirth" of Gyub. A glass display case near the pit contains a scroll named Gyub, Lord of the Pit, describing the ritual performed by the Heretics. Another scroll, found on a nearby table, offers more information and reveals there have been many other such volunteers.

No trace of the others remains, so they have presumably been devoured by the denizens of Fain's lower levels. This volunteer is still clad in his heretic's robe and hood, and carries a few gold coins. He has a 50% chance of carrying a random amulet or necklace, and 25% chances of also carrying a random gem and ring.