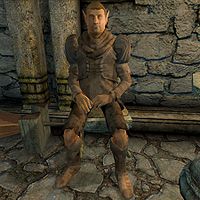 Brithaur is a Wood Elf living in Crucible, New Sheoth. He continues to annoy the other residents of Crucible with his thievery. For this reason, Earil requests that you get rid of him. If you talk to Brithaur, he tells you that he will end his crime spree only when you bring him five Flawless Pearls to complete his collection. During the non-journal quest, The Paranoid Roof Watcher, it is revealed that Brithaur's current residence is stolen from another citizen of Crucible.

He wears a pair of patchwork pants, a patchwork shirt and a pair of scruffy shoes. He also carries his key and a small amount of gold. Looting his corpse will reveal his heart which is used in his quest.

Brithaur explores the city every day, looking for potential opportunities for theft. He sleeps from midnight to 8am upstairs in his house, and will have a two hour breakfast downstairs when he wakes up. After an hour of wandering around inside, he will exit the house at 11am for some reconnaissance. He will either go to Earil's Mysteries, Things Found or Cutter's Weapons, which he chooses randomly. If he was persuaded to stop thieving during his related quest he would instead wander around Crucible; alas, due to a bug this will never happen. If the Sacellum isn't being used for the Main Quest, he will break off his session of stealing at 2pm for two hours of worship there. This cuts short his previous activity, and he will confusedly hurry home for two hours of wandering. Otherwise he will continue to wander around his chosen location until it is interrupted again by his three hour supper at 6pm. After a busy day, he will relax at home until bed time.

At different stages in the Main Quest, Brithaur will share several rumors with other NPCs:

After stealing from you he will say one of the following: