The UESPWiki – Your source for The Elder Scrolls since 1995
< Shivering Isles: Places: Landmarks
Jump to: navigation, search 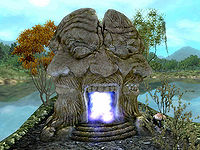 A Strange Door is a mysterious door on a floating island in the middle of Niben Bay.

Gaius Prentus has been posted to guard the door on orders from the Bravil City Guard and will be the first NPC you encounter. S'fara can also be found here, and will shortly be joined by Belmyne Dreleth.

The gateway appears in the Shivering Isles as the Door to Cyrodiil.

The island gives you a first taste of the flora populating both the Dementia and Mania portions of the Isles. The following table provides a full list of the ingredients that can be harvested from the plants in proximity.