Zombies are animate, rotting corpses found throughout the world of Shadowkey. They can be found anywhere from caves such as Earthtear Caverns, or out in the wilderness, such as Ghast's Pass. They can deliver powerful blows, and come in various different types, as listed below. 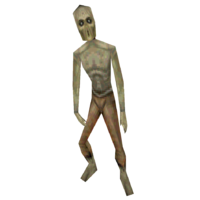 A zombie wandering around in Earthtear Caverns

The common Zombie, (also referred to as an Azra Zombie), can appear both in dungeons, and in the world. They are distinguishable due to their green skin and brown pants. These kinds of zombies are involved in several quests, such as Clear Earthtear Caverns and Witch Tree 1. On death they have a 25% chance to drop 5-15 gold pieces. 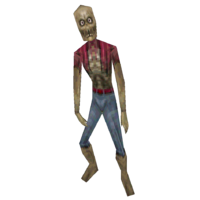 Flesh Defilers are a stronger type of zombie, and they can be found in places such as Twilight Temple. They are distinguishable due to their light brown skin, red shirts, and blue pants. Flesh Defilers have a 50% chance to drop 5-30 gold pieces when killed. 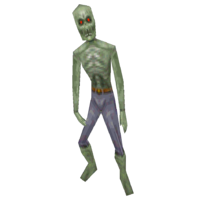 A Nightdead zombie in Twilight Temple

Nightdead zombies are the strongest type of naturally appearing zombies. They can appear in dungeons such as Crypt of Hearts and Twilight Temple. They are distinguishable due to their dark green skin, blue pants, and piercing red eyes. Nightdead zombies have a 25% chance to drop a Magicka Potion when killed and, unusually, they do not reward any experience either. 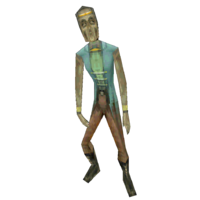 A Dawn Zombie in Twilight Temple

Dawn Zombies are quest-related zombies that only appear in the Twilight Temple. They are invulnerable to attack until you have has read the Scroll of Dawn from within the Twilight Temple's library. This can be a problem, as the entrance to the dungeon has a large number of them, and they have an unusually large chase distance (18000), so you may draw unwanted attention as you are searching the library for the correct scrolls. Luckily, they are weaker than the other zombie types, and they don't deal too much hard hitting damage either.

They can be distinguished from the other zombie types due to being very tall (almost as high as the ceiling of the dungeon), as well as their pale skin, silver crown, unique green shirt and light blue waistcoat. On death they have a 50% chance to drop 5-15 gold pieces. 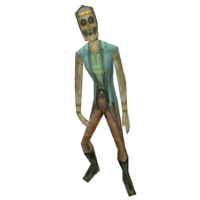 A Dusk Zombie in Twilight Temple