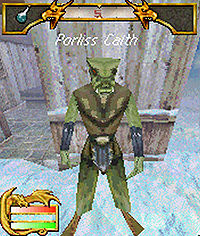 Porliss Caith is an Argonian agent for the forces of Hammerfell, who needs your help to neutralize the efforts of Tanyin Aldwyr.

He is first encountered in Snowline, where he wants you to discover Tanyin's plans and then investigate the extent to which the Imperial government is supporting Lakvan in his stronghold. He then moves to Dragonstar West, where he first wants you to check on the health of the leader of the Thieves' Guild and then to eliminate a Skyrim foothold in Loth' Na Caverns.

He holds one of the eleven Shadowkeys, and one of the seven Star Teeth.

When first spoken to if you have already spoken to Tanyin:

"I have seen you talking with that armored harlot while my scale cracks fill with snow.
I had a mission for you, but I need to get to Dragonstar West now as it is.
If you have considered your position, seek me in the council building, in the northwest of Dragonstar West."
Later, then.

If spoken to before speaking to Tanyin:

(Porliss huddles next to you as if for warmth)
"See that Redguard Knight? Her loyalties are most... un-Redguardian."
What?
"I think she is in league with Skyrim forces. She is looking for help, and whatever she needs done I most probably do not. If you could go hear her out, find out her proposition, turn it down and return to me, that would be most helpful. If you do this, you are undoubtedly helping to keep Dragonstar in loyal hands."
I am on it.

"Just talk to Tanyin, hear her proposal, then turn it down. How hard can that be?"

Once you refuse Tanyin's offer:

"Ah ha! If I could afford to pay you for the expression on her face, I would. Alas you will have to settle for doing the right thing… this time."

If Porliss Caith Subterfuge was completed this quest will be available when speaking to Porliss again:

(Porliss's tail swishes in the snow)
"Rumor says Lakvan, and others, are receiving Imperial backing. This could tilt the balance of power. I need to know which way the balance tilts, if it tilts at all. Infiltrate Lakvan's Stronghold, find evidence of Imperial involvement and bring it to me. Hammerfell greatly appreciates your effort in her behalf. Can you do this one last thing?"
Lakvan's it is.

Once you return with the evidence:

"So the Empire does gather strength. Yet, they do not seem to harbor a love for Skyrim. This could be good."
(Porliss shakes your hand and flicks his tongue in great excitement.)
"I need to get to Dragonstar West now. If you want some seasoning come see me in the council building, in the northwest section."

Porliss paces as he talks:

"These are terrible times for Dragonstar, and she needs everyone who has ever loved her to help her.
One such person used to run the Thieves' Guild. I need to know if he is still alive, and still in charge.
The Thieves' Guild is located in the northeastern part of Dragonstar East, the warehouse district.
If you do this, I have an ancient artifact, a Shadowkey, to give you."

Once Clever Sed has been spoken to:

"Ah ha! So Clever Sed still lives, and is still in charge. That is good news for us."
Yes, it's true.
(Porliss Caith slaps the ground with his tail in excitement. You earn 1,750 experience points. You receive a Shadowkey from Porliss.)
"Well done. I have a Star Tooth for you if you care to dispatch with another mission. Come and speak to me when you are ready."

(Porliss' tail swishes)
"Skyrim infests our city to the east, but they pincer us from the west.
Spies tell me Loth' Na Cavernes are being prepared, or are being used as a Skyrim base.
I need you to destroy that base, and eliminate General Duvais. I need you to do it in the most expedient manner possible.
If you do this, I shall give you a Star Tooth. Spies say these interest you, no?"

If spoken to again after accepting his quest:

"Good… you're still alive, but I need you to shut down that Skyrim base in Loth' Na Caverns."
Count on me.

"It's done! That Skyrim foothold is no more!"
(Porliss nearly leaps with excitement, then composes himself. You earn 2,500 experience points. You receive a Star Tooth from Porliss.)