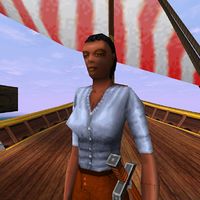 Yaeli on her ship

Yaeli is a Redguard sea captain who takes Cyrus by ship from Saintsport to the League hideout. She does not trust you enough to reveal the hideout's location until you show her Iszara's League insignia.

If you signal her after going to the League hideout, all of her dialogue topics will be hidden except "Take Me to League", "No", or "Yes" depending on your progress in the story. She will not take you back to the hideout again, and leaves once you are off the boat after asking any of these topics.

Restless League
Yaeli makes a brief appearance in this scene: Cyrus simply asks her to take him back to Stros M'Kai. Her ship leaves with Cyrus aboard, but she is nowhere to be seen.

Iszara Restored
She pokes fun at Cyrus and Iszara for catching up so quickly after ten years, to which Cyrus tells her to "shut up".

"Sheathe that sword, or be on your way."

"Where the hell is my sister?"
"And who the hell are you?"
"I'm Cyrus, brother of Iszara. And I demand to know where she is."
"I'm the one asking the questions. How did you get into the lighthouse?"
"One of your men, a prisoner of Richton's, gave me a key before he died of his wounds. And your code is keeping the local crazies up."
"Thrown into the Catacombs you were? Well, you've been busy. I'm impressed by the escape."

Before going to the League hideout:

If you asked "Iszara in League":

"Your time is running out Cyrus."

"Thanks for coming."
"This better be good Cyrus."

"Just tell me where my sister is. Now."
"It is not my place to give you that information. You'll need to talk to Basil, head of the Restless League."

"I know my sister is in the League. Now take me to her."
"I'm not sure why I am even talking to you. How do I even know you are who you say you are? I'm going to need some proof."

(Unlocked by "Where is Iszara?")

"Take me to Basil, if you're just his running girl."
"Basil doesn't just speak to anyone, especially a fool who'd use the signal during the day, with all the Imperial warships around.
"If they find our hideout, well...be sure you'll be the first one we'll kill."

(Unlocked by "Iszara in League")

"Proof? Of what?"
"Proof that you deserve the League's attention. Something that shows me I'm not taking a huge risk sailing you to the hideout."

"Surely, you've found a way to deal with Richton's fleet."
"Aye, dealt only to avoid them, not meet them ship to ship."

If you asked Krisandra: "Destruction of League":

"I heard you torched his flagship a while back."
"A sly attack of ours. We have the passion, but not the means to tackle his ships on the open sea.
"We choose to remain in the shadows, causing our esteemed Governor to keep one eye open when he sleeps and check his closets for cutthroats. Haa..he won't find us."

"What makes you so sure others don't know where your hideout is?"
"No one knows the waters around Stros M'Kai like the Restless League. We move in the shadows and lines they don't even know exist."

"I thought I already had your attention. A couple of your boys tried to take the ship I sailed in on."
"That was you? Huh. A necessary raid, I'm afraid. Captain Brennan has been moving a lot of goods for the Empire. But because of your involvement, that's one we'll have to wait on."

(Unlocked by "League's Attention" if Brennan is dead)

"Well, I already took care of that one."
"Hmmm. I hope you did it with style, but it's not good enough to get you to the League."

"Look, if it's gold you pirates want..."
"Surely you know by now we're not about wealth and thievery. This is about honor, Redguard history, and the Imperial cancer that plagues Hammerfell."
"Come on."
"Scoff if you like, shore-dog. But if I'm going to put my neck on the line, sailing you out to the League, you'll need to bring me a sign of trust, not gold."

"Risk. Is that what you're worried about? I've taken ten lives worth of them, and as far as I'm concerned, talking to you is one of them."
"Those are your risks, not mine. Don't lecture me on your life of adventure, either. I need nothing from you and you need my help. I'm doing you a favor by staying here this long."

(Unlocked by "Iszara in League" if you have the League insignia)

"Here's the proof you've been waiting for...a Restless League insignia from Iszara."
"I don't know where you got that, Cyrus, but it will do. The insignia scrawled as such buys you at least an audience with the League. Climb on board, we're off before the Imperials know I'm here."

(Unlocked after going to the League hideout)

"I'm going to need a ride back to the League."
"You don't seem to know where Iszara -- or the soul gem -- is, Cyrus. Until you have one or the other, don't bother signalling me again. You're putting us in too much danger. Goodbye."

If you asked "Iszara in League":

"I'll be back with your proof."
"I'll give you a few hours, no more. I'm not waiting around for the Imperials."

"Sheathe that sword, or be on your way."

"Where can I find Basil?"
"I have no idea. Go ask someone. And don't go poking your nose where it doesn't belong, or you'll be sorry."

"Thank you."
"Don't thank me, buster. Just get about your business. I have things to do."

"I need a ride back to Stros M'Kai."
"Look. You wanted to come. And here you stay until I hear different from Basil."

After the quest Rescue Iszara, her greeting would have changed to:

Also after rescuing Iszara, she would have had just two topics in Saintsport:

No
(If you don't have the soul gem)

"Not yet, I'm afraid."
"Cyrus. We're counting on you. You're the only one who can get it. Please. Find the gem. Awaken A'tor and raise the Crowns."
"I'll do my best."
"Ok. I must go now, before the Imperials see my ship."

Yes
(If you have the soul gem)

"I've found it, but I haven't found a way to bring A'tor's soul out. I need some help."
"The others will be glad you've found it. Iszara has been worried. But you're our only hope. The rest of us can't be seen on the island, it's too dangerous.
"You've got to find a way to remove the soul! Signal us only then. We'll be waiting. Good luck."