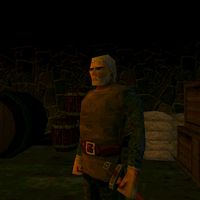 Urik in the Smuggler's Den

Urik is a Nord man that runs the Smuggler's Den beneath the Cartographer's. Before Iszara disappeared, she traded her League insignia to him for a piece of malachite. He is reluctant to hand over the insignia, so you must persuade, pay, or fight him.

If you ask Dreekius about the Smuggler's Den, he describes Urik as "some upright from the north; a quick-to-anger sort, [who] only talks to members of the Den."

Knock on the door outside:

"Why the naked steel, mate? That ain't neighborly."

"No more, mate. Enough is enough."

Climb on the table or sacks in the corner:

Climb on the barrels or closed baskets:

"Been hitting the moon-sugar, man?"

"Cyrus."
"Urik. Welcome to the Smuggler's Den. What do you want?"

After you fight him:

"Now. About that insignia. I think we both agree that I've earned it, fair and square."
"Sure, sure! Here you go. Listen, no hard feelings, eh? Just a misunderstanding between friends, is all, right?"
"Of course."

"I'm looking for Iszara, my sister. Apparently she did business with you occasionally."
"That's right, she came by from time to time. Last time I saw her, she was after a piece of malachite for some reason."

"Does the Restless League operate out of the Smuggler's Den?"
"We've always worked together, since way back before the civil war. Mutual interest and all that.
"But the League boys must be laying low, I haven't seen any of 'em in weeks. No matter. Smuggling's good business, with or without pirates."

"The Imperial occupation doesn't seem to have cramped your style much."
"Everyone needs smugglers, like it or not. For instance, Richton likes his Valenwood wine.
"The League makes sure none of it arrives legally, and we make sure the Palace cellar stays well-stocked. Everybody wins."

"A cozy little operation you've got here."
"Thanks, we like to think so. Who gave you the password, by the way? So I know who I need to beat the hell out of."

"Still, I'm surprised Richton gives you such a free hand."
"We have our uses. Like if you don't want the Emperor to know how much taxes you're actually collecting. As I said, everybody wins."

"Don't worry, your secret's safe with me. Not that this place is such a secret. Half the town seems to know about it."
"Yeah, well, we don't rate quite as highly as the Restless League on Richton's enemies list."

"What would Iszara want with that?"
"Dunno. She sure wanted it bad, though. Traded me a League insignia for it, said I could use it to get favors from the League.
"But since then, the League has vanished from Stros M'Kai, so I'm stuck with a worthless piece of paper."

(Unlocked by "Malachite"; disappears once you have the insignia)

"I could use that insignia Iszara gave you. Can I have it?"
"That depends. What's in it for me?"

"Hand it over, friend. That parchment was Iszara's, and now it belongs to me."
"The hell it does. I traded for it fair and square."

"Ah, a businessman. I'd be willing to pay you for it."
"Sure you would. Except I doubt you could afford it. That is, unless out-of-work thugs make more money than I thought."

"No, I'm sure you're quite familiar with the going rate. But why don't you name a price and we'll see."
"All right. 100 gold, not a shilling less. Are you good for it?"

Didn't think so. Why don't you come back when you're ready to do business.
"That's not acceptable. I think you're just going to give me that insignia."
"You think so, huh?"

"Yes. Here's your money. I'll be sure to mention your kindness when I find Iszara."
"Yeah, whatever."
(Receive League insignia)

"That's not acceptable. I think you're just going to give me that insignia."
"You think so, huh?"

You're Pushing Your Luck

"You're pushing your luck, blondie. I'll be happy to cut your throat if that's what it takes to find my sister."
"Easy, mate. I got a sister of my own, ok? Listen, I can see it's important to you, so you may as well take it. Here. No hard feelings, ok?"
(Receive League insignia)

"Listen. You give it to me, I give it to the League and put in a good word for you. What do you say?"
"What makes you think I need you to deal with the League? I've been handling Basil fine for years without you."

Basil is My Friend

"And look at where that's gotten you. Basil is a friend of mine, and if you play things right, you can come out of this a lot richer."
"You're a liar. How would you know Basil? I think you're an Imperial spy. I bet if I killed you, Basil would pay a handsome reward."

"So maybe I don't know Basil. I just want to find my sister, and right now, you're in between me and her."
"Ha! I call your bluff, you call mine. Fine, here's the damn insignia. It's no use to me anyway. A word of advice -- don't try that with Basil. He never bluffs."
(Receive League insignia)

"You said yourself that the League is gone. Give me the insignia. If I find them, good for you. If I don't, it hasn't cost you anything."
"Hmph. I guess you got a point. Tell Basil that I've got back orders piling up, as soon as he can fill 'em. Here you go."
(Receive League insignia)

She Would Have Liked You

"Because I know my sister. She would have liked you. She always did have bad taste in men."
"Is that supposed to be an insult? Hell, you may as well take it. I can see if I don't give it to you, you'll just stand here talking all day, and I got work to do."
(Receive League insignia)

"I don't know. But I know I'm not leaving without that insignia."
"Well then, it looks like we got a problem here."

(Unlocked if you answer Favors With League to "League Insignia")

"So who is Basil, anyway?"
"Head of the Restless League, mate. As long as he lives, so does the League. Until the Governor displays Basil's head on the Palace wall, I wouldn't count them out."

(Unlocked by "Occupation" or "Basil")

"Suppose you wanted to get into the Governor's Palace. Could you do it?"
"Not me. The Governor tolerates our operation, sure, but he doesn't trust us.
"Richton's a stickler for security -- and no wonder, the League would love to put a knife in him. Nobody gets in the Palace without a damned good reason."