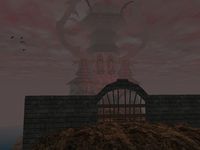 N'Gasta's Tower is the old wizard's tower on a small isle at the southern tip of the Isle of N'Gasta. The eponymous necromancer, N'Gasta, lives here and has been busy summoning Daedra and raising undead. The tower is connected to the main isle by a narrow bridge and a gate guards against intruders on the far side.

You first come here either by the directions of Kotaro or on your own to accept a delivery job from N'Gasta. He will emerge from the tower and slowly walk over to the closed gate, where he begins talking to Cyrus. You cannot enter the tower until you have the Flask of Lillandril and therefore have begun the quest Rescue Iszara. Once you have the flask, the gate will open as you approach and you hear N'Gasta say, "Come, Cyrus. This one has what you seek."

As you enter, two vermai rush toward you ready to attack. This tall circular chamber you find yourself in is centered around a large pit filled with a purple substance; the pit is surrounded by a scattering of bones. There are two small rooms on either side. A broken spiral staircase leads farther up to the top of the tower. It starts on the left and winds itself through the upper part of the left room, but ends at a large gap before it leaves. This left room has an altar-like table with the remains of a skeleton, which when activated will have Cyrus comment, "Must be where N'Gasta prepares the bodies."

The room on the right has a triangular shape and contains a cauldron. The table in the back of the room with the large red gem holds a glass vial. If you choose to look at the cauldron without the vial as your selected item, Cyrus says, "It's filled with some sort of elixir." With the vial in hand, you can fill it with the elixir. There are also two shelves in the room; when activated, Cyrus comments, "Text and trinkets for a necromancer. I have no use for this stuff." Two health potions sit beside the southern shelf.

To continue up the staircase, you must pour the elixir in the central pit to trigger an explosion. If you time a jump correctly, this explosion will send you over to the ledge where the stairs start again. There is a chandelier lit with a red light hanging in the center of the tower about halfway up the stairs. You enter into a room at the top of the tower, where Iszara is being held prisoner. Cyrus will speak briefly with her, but N'Gasta will appear and a cutscene plays, after which you must defeat him in combat. Once he dies, you are free to explore the top room.

Near the entryway, there are bookshelves holding all four base potions; from left to right, they are: ectoplasm, Orc's blood, spider's milk, and Hist sap. A semicircular table to the right of these shelves holds various rare ingredients: salamander, Daedra's heart, unicorn's horn, lich dust, and pig's sac. Next to this is a pedestal holding N'Gasta's Spellbook. There is a final bookshelf again on the right, this one holding saint's hair, spriggan's ear, and amber. You must use the potions and ingredients to open a portal to the realm of Clavicus Vile. More information can be found on the quest page.