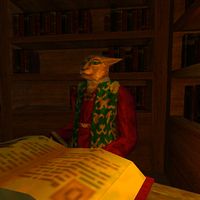 J'ffer behind the counter in his bookstore

J'ffer is the Khajiit proprietor of J'ffer's Books and the only bookseller in Stros M'Kai. While the shelves in his store are full, you can only buy five books from him, each, however, useful in its own way. While he has a neutral attitude to the goings-on in the town, he often talks in a sarcastic tone whenever Governor Richton is mentioned.

"Pardon, but no patrons behind the counter."

"Please. This is my shop, and not a place for kittenish capers."

"Welcome to J'ffer's."
"May your wisdom increase."
"I greet you. May I do you service?"

"Hail, desertwalker. I am Cyrus."
"J'ffer is at your service."

"Sky above and sand below."
"And water within.
"You speak the Ta'arga [sic] like a desertwalker, Cyrus. But there is no need for such formality."

(Disappears once all books are purchased)

"I'd like to buy a book."
"These shelves hold wisdom and folly in equal measure. Choose carefully."

"Your purse is too light to cover the price, alas."

"J'ffer is sure you will enjoy it."
"Excellent choice."
"May you grow wise with the reading of it."

(Disappears when bought; can buy again if you give the book to Maiko)

"How much for Elven Artifacts, Volume 3?"
"Ah, the hoary tale of the Flask of Lillandril piques your interest. Legend more than history, but a good read for 40 gold. Will it be yours?"

"Do you recommend Favoril's Dwarven Lore?"
"Marobar Sul's Ancient Tales of the Dwemer is more comprehensive, but hard to come by, alas, and a weighty tome too, at 16 volumes."
"For 54 gold, Favoril's little book is an excellent overview."

"Is Flora of Hammerfell worth buying?"
"The authoritative work, no less, and for the bargain price of 15 gold, it can be yours."

Redguards: Their Heroes and HistoryEdit

"How much for Redguards: Their Heroes and History?"
"Your taste runs to the patriotic. A tale to stir the blood and fire the soul of any true Redguard, although our esteemed Governor might not agree. J'ffer asks but 20 gold."

"What do you think about Ffoulke's Firmament?"
"Less ambitious than Yoonkarl's published studies, and less concerned with comparative astrology.
"Though a decidedly human take on the stars of Tamriel, Ffoulke's Firmament is not without it's [sic] own virtues. J'ffer can part with it, then, for 36 gold."

(Disappears after quest Escape the Catacombs)

"My sister, Iszara, is missing. Do you know her?"
"An all too common tale in this city. J'ffer regrets that he cannot count your sister among his friends."

(Disappears after escaping the Catacombs)

"Ever heard of a group called the Restless League?"
"Some say pirates, some say rebels. J'ffer knows too little to judge.
"Rumor calls them secret allies of the late Prince. Whether they survived the Crowns' defeat, J'ffer cannot say."

(Disappears after escaping the Catacombs)

"Stros M'Kai seems quiet, almost deserted. Has the Imperial occupation been so harsh?"
"Tiber Septim has many clansmen, of lesser repute than he. The city of the Redguards suffers under one of the least of these, Provisional Governor Richton."

"Windward lands? I'm not familiar with that term?"
"My apologies. J'ffer almost forgot he spoke to the unclawed.
"The coastlands of Tamriel, to the northwest of our desert homeland. Mighty Tiber Septim bids fair to become clan-mother to them all, Hammerfell included."

(Unlocked by "Elven Artifacts" whether you buy it or not)

"What do you know of this legendary flask?"
"Legends surround it, but J'ffer is sure the flask is real.
"Scribes of Ancient Lillandril record its discovery -- yes, the flask is not of Elvish make, despite what you may read.
"They found it, used it, and lost it, but its creator is unknown."

(Unlocked by "Flask of Lillandril")

"What makes the flask so valuable?"
"Here we have only legend to guide us. Stories tell of the High Wizard of Valenwood himself defeated by a stable-boy armed only with the flask.
"Exaggeration, surely, but still a kernel of truth -- an anti-magic device of no small power."

(Unlocked by "Use of Flask")

"It sounds like the flask may absorb magic."
"Perhaps. That would explain why no mage has ever been able to detect its location."

"I was surprised to see Hunding's statue still standing, national treasure or not."
"Doubtless our esteemed Governor has reasons aside from Redguard sentiment.
"Lord Richton has shown indifference to such niceties in other matters -- witness the fate of the Old Quarter."

"The Old Quarter? What happened there?"
"In his excessive zeal to root out his clan's enemies, Richton put it to the torch.
"A silent history of Hammerfell, wrought in stone and wood, now ashes. The Redguards speak of dragonfire in the night, but J'ffer remained indoors and so saw nothing."

"Do you mean a dragon was here on Stros M'Kai?"
"Was, is. J'ffer hears much, but knows little."

"Dwarven ruins? I'm intrigued."
"As well you should be. An amazing site, full of the inexplicable work of that vanished people.
"No longer open for visitors, however. The Imperials have resealed the ancient gates, for reasons known only to our honored Governor."

"Tiber Septim's reputation seems to depend on who you ask."
"True. And the Redguards have long memories, as the statue in the harbor attests.
"History loves an empire-builder, though. J'ffer cannot yet say who will write Septim's epitaph."

(Unlocked by "Stros M'Kai" or "Redguards: Their Heroes and History", disappears after escaping the Catacombs)

"Is there any way to gain an audience with the Governor?"
"Proclaiming yourself a Crown might work, but more likely will lead to a speedy death. Few besides Forebears have access to the Palace."

"There must be some other way into the Palace."
"An interesting architectural puzzle. The present structure dates to the early Common Era, a harmonious design, that is until our esteemed Governor began his renovations.
"The foundations are much older, connected to a maze of catacombs which may predate the arrival of the Redguards in Hammerfell."

"How do I get into the Catacombs?"
"That honor is now reserved for Crowns, who must find it a pleasant place, for none has ever returned."

"The Forebears run Stros M'Kai now?"
"Redguard politics largely escape me.
"The Forebears allied with the Empire to win the throne, yet who sits on the high seat of Sentinel? Not Baron Volag, strangely absent from public view since his victory."

"Do you think Richton dared murder the Forebears' leader?"
"A strange reward for your chief ally, J'ffer agrees. And no mention of murder passed J'ffer's lips. Still, there is no king in Hammerfell."

"Is it so dangerous to be a Crown these days?"
"J'ffer's interests lie more in the past than with the current upheavals, but even J'ffer can see that the city has been cleansed of dissidents.
"Yet soldiers continue to scour the island, to what end?"

"Do you have any idea what the Imperials are looking for?"
"J'ffer sent four copies of Dwarven Lore to the Palace last week.
"It may be no coincidence that Stros M'Kai, with the largest Dwarven ruins in the windward lands, has received particular attention from the mighty Tiber Septim's clansmen."

"Peace, desertwalker. I must go."