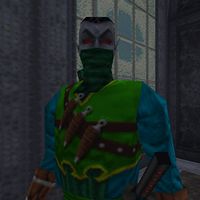 Dram in the Palace

Dram is a Dunmer lieutenant in the service of Lord Richton, who has tasked him with eliminating any resistance from the Restless League and other Crowns, including Cyrus. His main appearances are in cutscenes, but you have a chance to fight him on two separate occasions.

When you enter the Palace to deliver the amulet to Richton, Dram accompanies the Governor into the audience chamber. After you fight off the guards, Richton orders your execution, but Dram decides to interrogate Cyrus first and casts a spell knocking him unconscious. Some time later, you meet the Dark Elf again in the Jail. He approaches you from behind as you finish your conversation with Joto, then shoots and kills the Khajiit with his bow. Dram is a tough opponent, but flees after several hits using some kind of recall spell.

Dram fights you once more on the boarding platform of the Dwemer airship. Wielding the soul sword, you shouldn't have as much trouble with him this second time. He retreats, but in the final cutscene, he reappears to catch Cyrus off guard and holds a knife at his throat. Neither Dram nor Richton can believe what follows, as the soul sword rises under the power of Prince A'tor's spirit and slaughters them both. Dram suffers a particularly devastating fate, his body cut in half.

He also makes an appearance in the cutscenes that play after you escape the Catacombs and after you kill Nafaalilargus.

Little is known about the Dark Elven Imperial Emissary, Dram, though his loyalty to Tiber Septim is unquestioned. Ironically, his ancestors were preeminent nightblades of the Four Score War, wherein the Morag Tong systematically destroyed the heirs of the Second Empire of Men. Why Dram now serves Cyrodiil, Morrowind's longtime enemy, is a mystery, as is the reason Tiber Septim suffers any Aldmeri to assist in his conquests in the first place.

Like all members of the Morag Tong, Dram worships Sithis, the God of Death; indeed, he is a thrice-born initiate who continues his faith even after his exile. Again, details of Dram's exile are unknown. There are whispers that House Indoril, the chosen Dark Elven faction of the legendary Tribunal, took slight at the assassin's affairs and had him secretly executed in CE800, an insult the Morag Tong has yet to forgive. Others say Dram has been a companion of Tiber Septim since the Emperor first took the Cyrodilic Crown. Still more, that he is the apprentice of Zurin Arctus.

Whatever the case, Dram is one of the Empire's most trusted servants, and perhaps its deadliest assassin. Currently, he is stationed at Stros M'kai, helping Provisional Governor Richton root out the last of the Redguard resistance fighters.

Delivery Scene
Dram stands by Richton during his confrontation with Cyrus, understanding immediately that Cyrus has motives besides being a courier. Once Cyrus successfully kills the guards in the room, Richton asks Dram to execute the Redguard, but Dram decides to knock him out with a spell first and question him in the Catacombs.
Escape Scene
Hearing of Cyrus' escape, Dram concurs with Richton that it shouldn't have been possible. He says he underestimated the Redguard, though he is confident that he can deal with the situation.
Joto's Story
Dram appears in the Jail as Cyrus and Joto finish their conversation. He shoots and kills the Khajiit with an arrow and prepares to fight Cyrus.
Dragon is Dead
From the news of Nafaalilargus' death, Dram concludes that Cyrus took the soul gem. Richton is angry with Dram's inability to deal with Cyrus. Ignoring the criticism, Dram reveals that in the meantime he has discovered the location of the Restless League's hideout and once an assault party is ready, he will clean them out.
Palace Scene
A guard tells Dram that the Dwemer airship is ready. They hear an explosion, which the Dark Elf recognizes as Cyrus and the Restless League attacking the harbor. Dram walks into a large chamber in the Palace to confirm the news about Cyrus and inform Richton of the airship, which was intended to attack the League hideout. He is unable to get in a word, however, as Richton furiously rebukes his priorities and inaction. Richton plans to flee on the airship to the mainland instead.
Ending
When it appears that Richton's life is forfeit, Dram sneaks up behind Cyrus with a knife to his throat, demanding that he drop his weapon. He prepares to carry out Richton's order of summary execution, but as Cyrus gives his last exchange of words, Dram exclaims "Gods" as the soul sword rises up and impales Richton, killing him. Cyrus is able to escape Dram's hold, and the soul sword comes down to slice him in half.

"Come, Redguard, let me shave you to the bone."