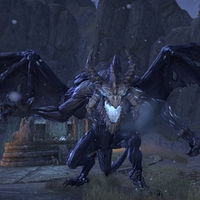 Zandadunoz the Reborn is a Daedric Titan who serves as the group boss of the Unfinished Dolmen in Wrothgar.

When you launch your attack on the dolmen, you will have to defeat all of the Worm Cultists surrounding the structure. Their sacrifice will summon two successive waves of Daedra, both of which must be defeated in order to force Zandadunoz to appear.

When summoned, he bellows one of several things:

"I am reborn as a pale shadow of the master. I claim this realm for him."
"You subvert the master. His will shall not be denied."
"The slaves act on ancient orders. You disturb their work."
"Little mortal. You shall be tested in ways you cannot fathom."
"I am reborn. The master bids it, and I obey."
"You cannot know the master's schemes. They are everlasting."
"Mortals. You summon me to destroy me? Such fickle creatures."
"Who disturbs my rest? You shall be punished. All shall be punished."
"You are but dust to be brushed from the face of this world."

Burning
A damage over time effect applied from being set on fire.
Scourge Bolt
A basic ranged ability that deals major flame damage.
Soul Fire
Strike
A basic melee ability that deals major physical damage.
Titan's Rage
Cold-fire rains from the sky leaving moderately sized AoEs all across the battlefield. Daedric Arches appear in ever circle of fire. Standing in them deals major flame damage.
Explosive Charge
Stonefire Scamps appear from the Daedric Arches that are summoned during battle. The Scamps run up to you and explode, dealing major Oblivion damage.

There is one Achievement associated with this creature: