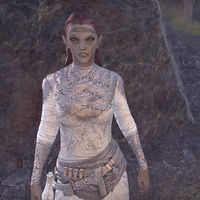 Yanabi-Asa is a Dunmer of the Urshilaku Tribe who can be found at the Cairn of Lammak Urshilaku near Ald'ruhn. She can be initially found kneeling next to some bones in prayer.

Her greeting to you will depend on your progression during the related quest.

"Bow your head outlander. You may not see the dead, but the dead see you—as do I."

Before placing the offering, she will comment on its appropriateness:

"Guar bones? Most outsiders would honor Lammak with useless baubles and incense. Your gift shows wisdom. Place it before the cairn."

After placing the offering, before quest completion:

"The Urshilaku salute you, n'wah. Ashlander or no, you have proven to be wise and valorous.
Our First Ashkhan, Lammak, herald of the Nerevarine, treasured wisdom and valor above all else. His spirit welcomes you as a friend. As do we."

"So, the Hleran-son plans to settle in Ald'ruhn. I would worry if I thought he stood any chance of surviving. When faced with hardship, the House Dunmer squeal and cry like children.
Believe me, the Wastes will make a meal of him."

At any time she can be asked about her tribe:

I'd like to learn about the Urshilaku tribe.
"We sing the truth songs. The truth of the three blasphemers, and the Daedra, and the Nerevarine. The Houses hate us most of all."
Why?
"Because we do not forget the truth of Nerevar. We know that the Tribunal will pass like wood smoke—driven away by the raging winds of the Incarnate. Vehk, Sotha Sil, and the Mad Wife will know this as well. They seek to silence us, but they always fail."

This Online-related article is a stub. You can help by expanding it.
Retrieved from "https://en.m.uesp.net/w/index.php?title=Online:Yanabi-Asa&oldid=2091699"
Categories:
Hidden categories: